I saw Whitney Houston And Gadhafi In Hell A Woman Claims, They Gave Me Messages 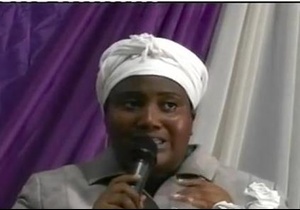 This is an interesting revelation made by a woman named Sister Linda.This is actually the 2nd part of her visit to hell and she names those she saw there with messages they sent her back to earth with. Just read and let me hear your take on this 'mata'.

Jesus went with me to hell this time, when I was with Jesus, the brightness of Jesus; Jesus have light all over His body, when we entered that dark place, I was seeing, I could see, this time, the people in hell because of the bright light on Jesus (Jesus is walking with a bright light, a glorious light). Continue...


And then, Jesus opened my eyes to see some of these men and women in hell. Jesus gave me message to Sierra Leone, He said if I should have come in December to January only five people in Sierra Leone would have raptured five only. That includes the three righteous pastors and five other people in and out of the church, when I said this in Sierra Leone, people said it is lie.

Jesus said Sierra Leone is polluted; that the shepherds he gave the word to preach to His people in Sierra Leone are dying to meet God, but majority are in hell. So Jesus sent me to Sierra Leone

When we were in hell, Jesus showed me a glass-like aquarium with people inside it, the souls of human who are still on earth are in that glass inside hell. These are people on earth who are working for demons, we have some people on earth who don’t believe anything, they are on their own, doing all sorts of bad things, even pastors who knows the truth but are bowing down to Satan,  they are partakers of Satan’s communion, their souls are in that place.

“Tell my Libya people to worship Jesus” he said, “Tell my people to believe in
Jesus”, he said, “Ah Jesus, have mercy, I never knew you are the right way, have mercy on me”.

He said, even the people who killed him on earth, he doesn’t want them to come to hell, he said “Tell my people to believe that Jesus is the right way”

He also gave me another message (why he gave me this message is because, he said, the entire mosque he built on earth should be destroyed and turned into churches so that people will glorify Jesus and maybe the punishment on him in hell will decrease. Because anything here on earth that you build that does not glorify Jesus Christ, that does not glorify God, that does not make people to come to their right Father(hotels, bars etc.), anything sinful in the world that you build (when you die, you leave these things on earth). People will be there doing all sorts of evil things, as far as people are enjoying these places, or practicing all sorts of evil things, in the place that doesn’t glorify Jesus Christ, the demons will increase the pain on you in hell.
So he said, “Please so that the pain will decrease, I know if people will worship in my mosque, if they will call Jesus there, maybe the pain will decrease”

President Lasana Conte, former president of Guinea, he said, “Tell my people in Guinea, let them Jesus over Guinea, and let them turn to Jesus because Jesus is the only way.”

He said where he is, he doesn’t want anyone to be there, he said tell my people to believe and trust in Jesus, he said, he built a cult that he was sponsoring and he was also in the cult. He said, he wants the people to destroy that cult, let them come to Jesus.

And one famous Lawyer that died: Usher Williams, he was the deputy speaker of House of Parliament in Sierra Leone House of Parliament. He was in one cult, they call the cult in Sierra Leone “Louch” and he was in devil business, ordaining devils. He said I should tell his “Louch” brothers that they are heading to hell, all his cult brothers that died before him, he saw them in hell, he said “Please destroy louch, destroy these devils” he said, “turn to Jesus, He is the only way, hell is real”.

And then, I saw one prophet: Prophet Mani, he was the owner of the Burning Bush, that man said he would die but that he would also rise up after three days. And when he died, they took his body to the mortuary, his congregation said that they should not bury him, after three days he did not rise again, he was there for one month until the mortuary people said they should come and take their corpse away.

I saw this man in hell; he said

“tell the people that I did miracles and signs and wonders with communions, these communions, those anointing oil, I ordained them and dedicate them to the demons” he said, tell them to go to a church where they can be delivered or else if they die they will go to hell because I ordained them for Satan; Satan was the one giving me all these powers.”“And tell them to destroy my church because the foundation is from Satan, everything up to the roof is from Satan”.

I saw one woman- a musician I liked so much- I always listened to her music when I was in the world:Whitney Houston: she said,

So I always pray to Jesus, whenever I stand to give this testimony, to give me the boldness and strength, because any time I think of my parents, I loved my mother so much but she didn’t know Jesus.
She was crying; she said, “Please I miss you guys, tell your sister to follow Jesus, I don’t want you people tom come here”

Don’t go to hell, hell is not a place for people like us.

And God showed me a young boy, about five or six years old, because of witchcraft, God say I will judge all men.

When Pastor Ken Paul said a child can go to hell, I argued in my mind that God would not do something like that, but God showed me this boy, a small boy, because of witchcraft.

Satan is wicked, now if you go to crusades in Sierra Leone and they say witches should come out, you will see small-small children

When you are coming for a program like this, don’t leave your children behind; come with them so that Jesus will deliver them. If you leave them and they die, they will go to hell, no matter how small they are; as long as they have sense and know what is bad and good.
I saw another woman who was in Thailand when she died, she was a believer in Jesus married to a Muslim, then backslide. She said I should tell her daughters, “I loved their father so much and trusted him, not knowing that this man was in occultism”, he sacrificed his wife

She said, tell them to go out and stand firm in the church, in Jesus who is the only way

She gave the man’s name and address. When we return back from Nigeria, we will try and go and do a tour.

Culled from www.citofgod.com
Posted by Unknown at 7:02 am
Email ThisBlogThis!Share to TwitterShare to FacebookShare to Pinterest
Labels: Gists