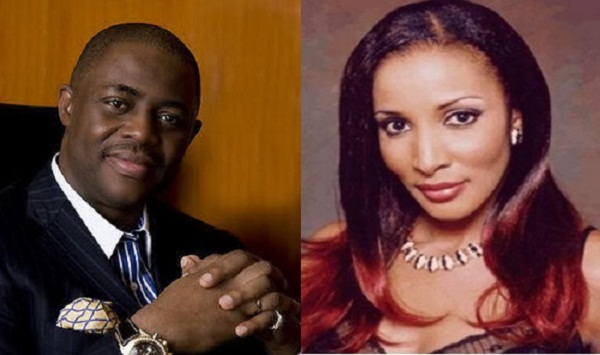 Dim Chukwuemeka Odumegwu-Ojukwu’s widow and Nigeria’s ambassador to Spain, Mrs. Bianca Ojukwu, has described as false the claim by former Aviation Minister, Chief Femi Fani-Kayode, that she was his girlfriend when she was a spinster.

Fani-Kayode had in his article, entitled: “Neither a tribalist nor a hater,” published in the social media and some segments of the national dailies (not The Sun), claimed to have met with Bianca when she was Miss Bianca Onoh at the Cambridge College and had “intimate” relationship with her together with two other Igbo ladies.

Reacting to this, Bianca said  she had never met Fani-Kayode before, either at official or private level, not to talk of having an “intimate” relationship with him.

The ambassador, who spoke through her lawyers, Wall Street Attorneys, has, therefore, threatened to drag the former aide to ex-president Olusegun Obasanjo to court if, in the next seven days, he fails to retract his libelous publication against her.

In the letter from her lawyers to Fani-Kayode, dated August 27, 2013 and signed by Mike Ugwuanyi, Esq, Mrs. Ojukwu demanded that the former minister writes an apology and retraction of the said libelous publication in The Sun and Thisday newspapers, as well as publish it in the online publication, where it emanated, in the next seven days or face litigation.

The letter written by Mrs. Ojukwu’s lawyers and obtained by The Sun read in part: “We have been briefed and our services retained by Ambassador Bianca Ojukwu, Nigeria’s Ambassador to Spain to demand from you an unreserved apology and a retraction of a false and malicious statement, which you published online and also caused to be published in the Leadership Newspaper of August 16, 2013.

“In the said article entitled, ‘Neither a Tribalist nor a Hater,’ you recklessly alleged, as follows: ‘I was not a tribalist when I had a long standing and intimate relationship with Miss Bianca Onoh…’, a statement, which you know is untrue and unfounded, but only calculated to lower our client’s esteem and damage her national and international reputation.

“Our client is therefore, outraged by your bizarre and scandalous allegation and the numerous mails and telephone calls she has received from friends, relations and admirers who are equally embarrassed and who seek to confirm the veracity or otherwise of your false and reckless publication.

“Your apparent lame and half-hearted attempt, as published in the Leadership Newspaper of 17th August 2013, to clarify your false and malicious allegation falls far short of a retraction and does not sufficiently address the damage to our client arising from the widespread dissemination of your false publication and is therefore unacceptable to our client.

“Take note that should you fail to tender the apology and publish a retraction of your false and malicious publication, seven days next after your receipt of this demand notice, our further instructions are to seek appropriate redress in court. And that shall be without further recourse to you. Be properly guided.”

Posted by Unknown at 11:04 am
Email ThisBlogThis!Share to TwitterShare to FacebookShare to Pinterest
Labels: Gists