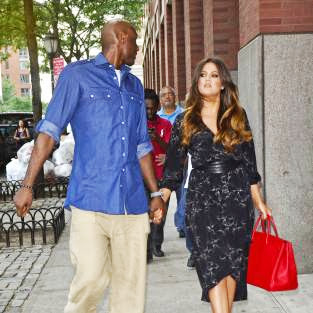 Wow. I did not see this coming. Khloe and Lamar have reportedly separated since the basketball star refuses to get help for his alleged drug problem. While they have not taken steps toward divorce yet, a new report claims a permanent split is likely.

Khloe Kardashian may be starting to rethink her decision to marry Lamar Odom after only a four-week courtship. The Keeping Up With the Kardashians star reportedly threw the NBA player out of their house on Aug. 21 after he refused her attempt at an intervention.

Lamar, 33, has reportedly had a cocaine problemfor at least two years and Khloe, 29, wants nothing to do with him until he’s clean, TMZ reports. Continue...


On a positive note, neither Khloe nor Lamar has consulted a divorce lawyer, however, TMZ is told that a divorce is likely to happen.
If and when a divorce does happen — let’s  pray it doesn’t — an iron-clad prenup, which Khloe and Lamar both signed before they married, will keep both of them protected.

Khloe Kardashian Getting Support From Her Family

“The entire family is rallying around Khloe,” a source close to the Kardashians revealed. “They support her whatever she decides to do.”
The source further explains:

She’s totally embarrassed because everyone thinks Lamar has been cheating and that she hasn’t been able to give him a baby. But in reality he’s been doing drugs and she hasn’t wanted to start a family with him while he’s like that. She’s never been able to tell everyone the truth because she’s been protecting him.

What do YOU think?  Should Khloe and Lamar get divorced?
Posted by Unknown at 12:29 pm
Email ThisBlogThis!Share to TwitterShare to FacebookShare to Pinterest
Labels: Hollywood