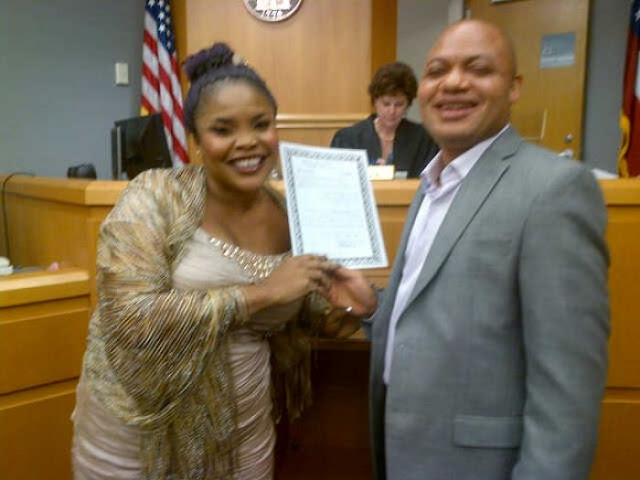 That's according to E247mag. Here's how they are telling the story.

A fortnight ago when star actress, Lola Alao, got married in far- flung Atlanta, United States of America, USA, to Adewale Yakubu Adewale Ajibola, the couple, literally, could not contain their excitement.
Lola was positively glowing in her creamy wedding dress while Yakubu sporting a bespoke grey suit, wore a disarming smile.

Though not an opulent wedding, they exchanged marital vows, flaunted the marriage certificate and
the pictures  that went viral online generated mixed reactions.
There are fears too, solemn fears: Lola's new hubby is plagued with an ugly past - a credit card scam that kept him 'inside' in a Kuwaiti cell.

According to an insider, this isn't the first time the 'Nigerian big boy' has been on the wrong side of the law.
His claim to relevance and easy bait for unsuspecting women who wanted love and affection, has been his American citizenship’s status and his dashing looks, a reference to what in Yoruba parlance is called Faworaja, (meaning a person who lives off his looks).

When he was arrested in Kuwait for the credit card scam, Yakubu, was able to answer the police questions adroitly, but the authorities were not convinced of his claim that he was innocent.
A ring of 'scammers' had some months before his arrival, operated in the same manner and went away with their loot in the Middle East commercial city.
Unsuspectingly, Yakubu walked into a booby trap.

While Wale Yakubu Ajibola, the Nigerian-born American citizen served terms for one year,  the Big Sam turned the other cheek.

Lola, who is hell-bent on getting a husband, was not too lucky last year when her hatched plot to marry another Nigerian based in Europe was thwarted by her first husband, Dare Ogunlana,  who unleashed a media attack on her.  Meanwhile, Lola found a close ally in another actress, Bukky Wright, also married to a US-based Nigerian, Wale Onitilo.
Lola and Bukky seem to be best friends in real life because their chemistry comes through effortlessly.

Since her marriage to US-based lover and car dealer, Dare Ogunlana, broke up, the Kogi-born actress has met a few men but she has not been quite lucky to have one of them put a ring on it.

Bukky, we reliably gathered has been concerned and busy setting Lola up on dates with non-famous friends and some buddies of her current hubby. She wanted Lola to have her kind of relationship that will guarantee American citizenship status.

When Yakubu walked in, it was a willing and desperate Lola he met and, trust her, she quickly hung on tight. Sources disclosed that while he was cooling his feet in the Kuwaiti authorities' cell, Lola scampered for his release by consulting marabouts widely.
They were constantly in touch on phone and gradually they  built the affection.

On release some months ago, after serving terms in Kuwait for one year, she sent him a ticket to come home, made few appearances at functions that were private  and  they bonded before he returned to the United States  to prepare for the August wedding.

While Lola has taken the highroad by walking down the aisle with Yakubu,  brimming with broad smiles that  she has found love and a good match, observers of Nollywood  marriages and the rate at which it dissolves, feel Lola may have finally found a big catch to perfect her plans for an American citizenship status.

Yakubu, E24-7 MAGAZINE'S checks revealed, has never been married but he has three kids, including a set of twins  from two women among his strings of ladies.

From his profile, though he claimed to be an ICT expert, he is not quite buoyant financially and his recent incarceration in Kuwait has not helped.

There is no record of an apartment in his name; the newly married couple are guests in one of the hubby's relations' house in Atlanta.

Prior to his ill-fated venture in Kuwait, he is said to have been living off his relations in California before life threw terrible storms at him and he moved to Houston.
In his bid to survive, he crossed to Atlanta where he allegedly joined the credit scam racket popularly known as 'Track 1, Track 2'.

For Lola, it has been a tortuous and lonely journey with her 10-year- old daughter, Omowunmi from her first marriage with Dare.
As she stepped out from the depths of despair to happily ever after, it is not clear if Dare will not sue her for bigamy as their marriage consummated in Nigeria has not been officially dissolved.

Lola and Yakubu are expected in Nigeria soon.

Posted by Unknown at 2:06 pm
Email ThisBlogThis!Share to TwitterShare to FacebookShare to Pinterest
Labels: Gists