BankyW Tells His Story Of How He Went From Grass To Grace, ‘I Begged To Sell CDs In US Salons To Survive’ 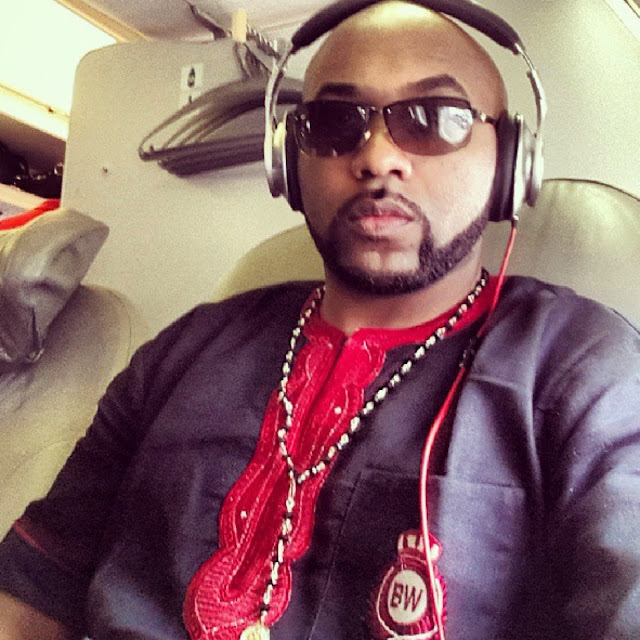 Banky W is one of the richest artist in Africa but it didn't come easy. In a chat with with Vanguard, BankyW shared his story - how he moved from being an undergraduate begging for audience at salons in the United States, to building a musical empire that has produced internationally acclaimed artistes like Skales and Wizkid.

Excerpts:
“Everybody knows me to be the Chief Executive Officer, CEO, of EME, but what people do not know is that EME started when I was in my third year in university in New York.
You see, we all dream dreams, but it is important to think very big and start where you are because God never gives you everything but gives you enough to start.
At that time, I knew I wanted to do music, but of course I understood nobody starts by selling a million CDs or the big screen!

I worked in fast foods outlets, clothing stores and as a knife salesman, selling knives from door to door. That way, I gathered money to pay for studio recording time. I was recording with a close friend at that time.

After making that music, we printed a thousand CDs though we didn’t have any fan. I had one battered car that broke down virtually everywhere, so, we would print black and white posters, stick them on the sides of the car, sell from the car’s trunk and drive to salons to do marketing.
We would walk to the owners of the salons, greet politely, and ask them to let us entertain their customers. Sometimes, some would kick us out and sometimes some would say yes. If told yes, after singing for a minute or two, we would sell our CDs to the customers! That was the beginning!
A lot of people see you on stage and see the success but do not know what you had to go through! I never had one really big break; it was always two steps forward and a couple backwards.
But I just decided that I was going to make music work for me. That was why I moved on to a new salon each time any salon rejected me!

I just kept going because I believe failure is when you give up. Albert Einstein said he tried a hundred times to make the light bulb. When he was asked what kept him going during the 99 times, he said: ‘I didn’t consider those 99 times as failure; rather, I considered them 99 ways that it didn’t work!’
We went about selling CDs and, on the days we couldn’t sell much, we would sit down and be broke together. I remember my friend was a member of a church that usually served food after service. So, on the days we didn’t sell CDs and were too broke to buy food, we would attend service in that church so we could pack rice and store in the fridge.

At a point, being a student of industrial engineering, I was working for an engineering company and was recording as well. I would go to work from 7am till about 2pm and then go to school till about 8pm, and then drive two and a half hours to New York City where the studio that would let us record for less was, and record until about 2am.
I would then drive two and a half hours back home to be back at work at 7am the following day.
One day, I was driving home from work and was so tired that I fell asleep while on a bridge. I would have driven off from the top of the bridge to God knows where, if not for an on-going construction work. God really saved me!”

After a while, Banky’s hard work began to pay off and, even while in school, he began winning awards, beginning with the ‘Albany Idol’ competition. Other international awards soon followed.
In 2008 when he decided to move to Nigeria after the completion of one of his albums, Mr Capable, Banky was consistently told his genre of music ‘would never appeal to Nigerians and therefore wouldn’t ‘sell’.
As he got turned down, pressure mounted on him and his manager to change their genre of music but Banky strongly held on to another long-standing principle which had taught him to stand out by being unique rather than trying to imitate anyone’s skill.
He therefore insisted on sticking to R&B, and this paid-off as he soon became a household name in the Nigerian entertainment industry!
Banky's advice:

“You cannot say enough about the grace of God and I therefore do not want to claim any form of glory. Falling down is inevitable but getting back up is optional!
Frankly, you can’t appreciate sunshine if you’ve never been through a heavy rain. Yes, life is tough, but what do you do in those tough moments?
Do you learn the lesson, stand up again, consider yourself stronger and keep going? Or do you sit down and feel sorry for yourself?
The graveyard, they say, is the richest place in the world because therein lies so many who died with their dreams. So, my advice is, do not give up! If Banky can be where he is today, you can be where you want to be if you put to mind to it.”

Posted by Unknown at 7:20 am
Email ThisBlogThis!Share to TwitterShare to FacebookShare to Pinterest
Labels: Gists