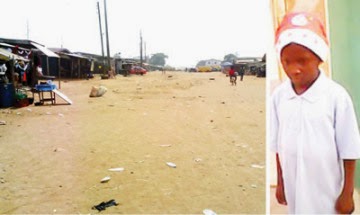 A 12-year-old boy, Samson Egunje, has been accused of killing his friend, Samuel Igbekele, in the Ikotun area of Lagos State. The incident happened on Saturday on Omoboriowo Street. Residents said the suspect, a primary six pupil, had been looking for the victim all day, saying he abused him in the morning and threatening that he would stab him in revenge.

Egunje was said to have stabbed Samuel with a bottle in the neck that evening while he (Samuel), a primary three pupil, ran errand for a neighbour. After the attack, the victim reportedly held his neck as he ran across the road in a frantic effort to get to his parents’ house which was a few kilometres away.


Samuel, after taking some feeble steps, was said to have collapsed. A resident, Ibrahim Sulaiman, said he saw him on the floor in a pool of blood that night. He said,

“I was under a tent where some people had had a wedding ceremony. I saw some kids playing with bottles and I drove them away. After I finished drinking with my friends, I went to a woman selling noodles and asked her to prepare some for me and that I would come back for it. While returning for my noodles, I saw the woman beaming a torch on the boy, and when I asked her who he was, she said she did not know him.”

The victim’s father, Solomon, a bricklayer, said his landlord’s son alerted him to the incident and he took him for medical treatment. He explained that Samuel was about to eat his dinner on the fateful night when the neighbour sent him on an errand.

“It was not up to five minutes when my landlord’s son ran in and said my son had been stabbed with a bottle. I ran there and saw him on the floor. I took him to a nearby hospital and the nurses there did not want to accept him from us, but when the doctor came out and examined him, he certified him dead on arrival,” he said.

The victim’s mother, Mary, told our correspondent that she took Samuel’s corpse to the suspect’s mother’s house. She said she laid him in front of the house for more than one hour because she momentarily lost her mind.


“Before Samuel died, I asked him who stabbed him and he kept saying ‘Samson, Samson’ before he went silent. I asked Samson why he killed my son, and he said Samuel abused him in the morning and he had promised to stab him. My son had just bought new clothes and shoes for the New Year celebration, but he can no longer wear them. They have taken away my joy.”

She said she suspected the suspect’s mother was trying to bury the case, adding that nothing would satisfy her than to see her son get justice. Our correspondent learnt that the Ikotun Police Division had arrested Egunje and five other kids in the neighbourhood.

The corpse has been deposited at the Isolo hospital morgue. PUNCH Metro visited the residence of the Egunjes and met some residents who initially were reluctant to speak about the incident. After some banters with our correspondent, one of them, who did not identify herself said the suspect, who was in primary six, was not known for unruly behaviour. She said,

“We didn’t even know about the incident until the boy’s mother brought the corpse to the front of the house. Samson was well-behaved and when he has done something wrong, he will start crying and tell you what he has done. There were several kids with him that night and it is doubtful he killed the boy. Even the corpse showed there was just a small gash in his neck.”

It was learnt that the suspect’s parents were separated and he lived with his mother. The Police Public Relations Officer, Kenneth Nwosu confirmed the incident. He said,

“The matter is almost concluded and ready for transfer to the State Criminal Investigation Department, Yaba. Five suspects have been arrested.”

Posted by Unknown at 12:29 pm
Email ThisBlogThis!Share to TwitterShare to FacebookShare to Pinterest
Labels: Crime