We Didn’t Rob; We Only Collected Our Dues – Suspects Arrested For Robbing and Looting Shops at Alaba International Market Claims 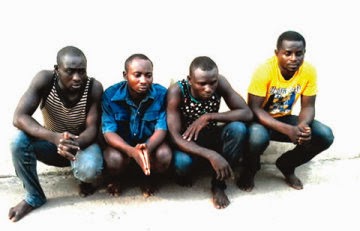 The police have arrested four suspected robbers at a Lagos market who claimed they did not steal from the traders, but only came to collect their dues. The suspects- Onyenge Osanie, Azuka Eboh, Ezelonwu Michael and Afolabi Shakiru- were nabbed by the police while they were looting some shops and robbing traders at the Alaba International Market, Ojo, Lagos.

Our correspondent gathered that the suspects, who are four members of a ten-man gang, were arrested by operatives of the state Special Anti-Robbery Squad on December 20. According to the police, the gang, which is led by a runaway suspect identified simply as Friday, made use of locally-made guns in their operations.


Our correspondent also learnt that most of the gang’s victims were phone dealers, and the gang allegedly carted away about 70 smartphones and Ipads which were worth about N1.5m. Speaking with PUNCH Metro, 35-year-old Osanie said the gang robbed the traders and looted their shops, because they refused to ‘settle’ them. He added that they only targeted shops of traders who had ‘offended’ the gang. He said,

“We usually work with phone dealers in the market who specialise in selling stolen phones. When we steal, they sell, and they then settle us. But later on, some of them defaulted, and we attacked their shops. It was not as if we robbed them, we only came to ask for our money.
“On that day, we had taken only 10 phones before the police apprehended us. I had initially escaped, but two gang members who were caught at the scene later brought the police to arrest me.”

Osanie, a father of three, said he regretted working with the gang, adding that if he was released, he would not indulge in robbery again. Also, 27-year-old Eboh confessed that the gang did not only burgle shops, but also vandalised some property during the operation. He said,

“What we learnt initially was that a market chairman was coming to give out money but he later failed to show up. That was when we decided to deal with the traders. When we got to the shops, we broke their glasses and carted away expensive phones.
“I joined the gang because I did not have a job. I have been living in hardship with my family.”

Meanwhile, Michael, 22, said he had also gone with the gang on three occasions, adding that they took advantage of the traders’ ‘misbehaviour’ to rob them.

“I was working as a truck driver before I met them. I had gone out with the gang on three occasions to rob in the market. We only took advantage of the commotion of the market to rob them. It was not deliberate,” he said.

“Investigations are still ongoing on the matter at SARS,” he added.

Posted by Unknown at 1:19 am
Email ThisBlogThis!Share to TwitterShare to FacebookShare to Pinterest
Labels: Crime