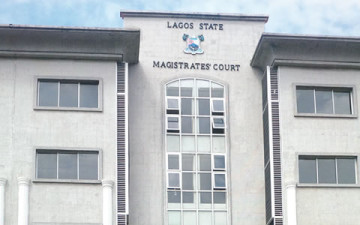 The Lagos State Police Command has arraigned one Hammed Mosuro, an employee of Access Bank Plc, for allegedly stealing the sum of N1.8m belonging to two customers of the bank.

The 29-year-old, who had been outsourced to Access Bank Plc by another firm, XL Management Ltd., was alleged to have collected the money from two costumers and failed to credit the customers’ accounts.

The suspect, who worked at the Apongbon branch of Access Bank, Lagos, was alleged to have made fake tellers to the customers without paying the money into their bank accounts.

It was learnt that the bank was made aware of the fraud when the two customers complained about non-receipt of the lodgments into their accounts.

It was gathered that when Hammed was questioned on the cash theft, he acknowledged the receipt of only N400,000.

Mosuro was subsequently arrested and arraigned before an Igbosere’s Magistrate Court on six counts bordering on stealing and fraud. The charges read in part,

“That you, Hammed Mosuro, and others at large, between July 3 and July 6, 2015, in the Lagos Magistrate District did defraud Access Bank Plc, of the sum of N1,809,500.00, property of Access Bank Plc; and thereby committed an offence punishable under Section 368(1)of the Criminal Law of Lagos State of Nigeria, 2011.”

The defendant pleaded not guilty.

The Chief Magistrate, Mrs. A.G. Omoyele, granted the defendant bail in the sum of N500,000 with two sureties in like sum.

The case was adjourned for mention till October 12, 2015.

Posted by Unknown at 1:18 am
Email ThisBlogThis!Share to TwitterShare to FacebookShare to Pinterest
Labels: Crime