’50 senators’ Accompany Saraki to Tribunal for Corruption Trial, to Prevent Him From Being Arrested and Humiliated by the Police 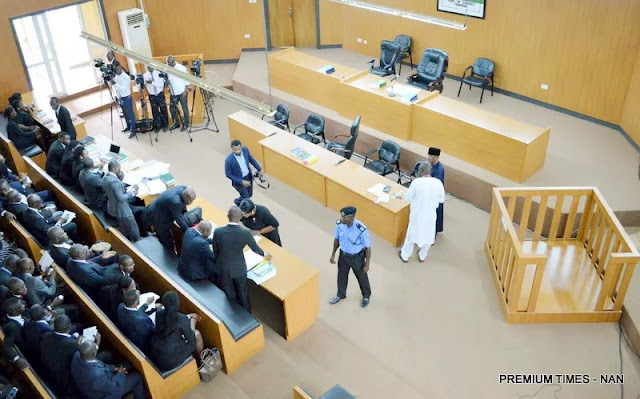 Mr. Saraki arrived the tribunal premises at 9:32 a.m., accompanied by “about 50 senators and some members of the House of Representatives”, his spokesperson, Yusuph Olaniyonu, told PREMIUM TIMES. Mr. Olaniyonu however declined further comments, saying he was already seated in the courtroom.

The Chairman of the Tribunal came into the courtroom at 10.32 a.m, and apologised for the delay in the commencement of proceeding. He said the tribunal was sorting out some matters.

This newspaper learnt that the Senate President and his supporters first converged on the National Assembly early on Tuesday morning from where they took off in a convoy of buses for the tribunal.

One of the senators, who asked not to be named said he and his colleagues decided to provide cover for the senate president to prevent him from being arrested and humiliated by the police. A supporter of the Senate President, now also inside the courtroom told PREMIUM TIMES,

“We are already seated. No shaking. The plan is to humiliate the man, not minding if they break the law or violate the procedure.

“We have nothing to fear. After Saraki has exercised his fundamental human rights in relevant courts, we are here to to show the lies contained in the charges.”

Mr. Saraki had on Monday released a statement, saying he was now ready to attend his trial, days after he battled frantically to use the courts to halt the trial. The tribunal had ruled Monday that Mr. Saraki must appear before it at 10am today.

Mr. Saraki failed to appear before the tribunal during Monday’s sitting despite an arrest warrant issued against him by the tribunal last Friday.

He is facing charges bordering on corruption and false assets declaration.

Posted by Unknown at 11:17 am
Email ThisBlogThis!Share to TwitterShare to FacebookShare to Pinterest
Labels: NationalNews