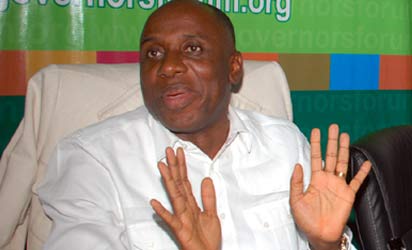 THE immediate past governor of Rivers State, Mr. Rotimi Amaechi, has dragged the Peoples Democratic Party in the state, its Chairman, Chief Felix Obuah, and two others to an Abuja High Court over allegations that he embezzled $757m (N80bn) belonging to the state while in office.

In what appears to be a fight back by the former governor, Amaechi said in a statement he issued on Tuesday that he had also sued the state PDP and two others for alleging that he (Amaechi) operated a private foreign account where he lodged the said public funds.

Although the former governor did not identify the two other persons he joined in his suit, Amaechi said the allegation had done a lot of harm to his person and reputation, and he demanded N300 billion as damages.

Amaechi recalled that the state PDP on August 6, and August 21, 2015, alleged that he stole the sum of $757 million or N80 billion of Rivers money and stashed them away in an account in his name in Bancorp Bank in Minnesota, United State of America.

The immediate past governor explained in a statement that ever since the said invidious and libelous publications by the PDP and Felix Obuah emerged in public domain, he had been

“inundated, bombarded and confronted by several persons who expressed lack of respect, loss of faith in him and who no longer regard him as trustworthy and now view him as a common criminal.”

“The PDP also alleged that Amaechi had embezzled millions of dollars of Rivers State money and stashed the money in other foreign accounts in his name, including a bank in Switzerland. The PDP claimed that the various Amaechi foreign accounts were revealed and blown open by Christine Amanpour of America’s Cable News Network.

“The PDP went further to claim that Bancorp Bank, Minnesota, had written to President Muhammadu Buhari that part of the funds was to purchase a residence for Amaechi in America and that they (Bancorp Bank) intend to return the stolen funds to Nigeria.

“Against PDP, Felix Obuah and two others, Amaechi is seeking the sum of N300, 000, 000, 000.00 for general damages done to him and defamation of his character, reputation and person.”

However, in this fresh suit filed before an Abuja High Court, FCT, Amaechi stated that each of the said malicious publications by the defendants (PDP, Felix Obuah and two others) are untrue, false, motivated by ill-will and without any foundations in truth whatsoever.

Reacting, Obuah told our correspondent that he would not comment on Amaechi’s action immediately.

Obuah promised that his lawyers would react appropriately by the time he read the publication on the said lawsuit by Amaechi.

Posted by Unknown at 12:37 am
Email ThisBlogThis!Share to TwitterShare to FacebookShare to Pinterest
Labels: NationalNews