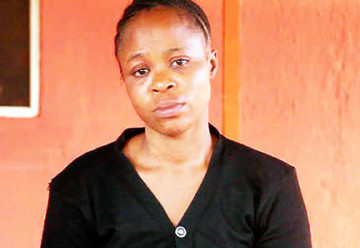 Controversy has continued to trail the inability of a woman, Jessica Ugwuoke, to offset her medical bill of N285,000 following a caesarian section at Samaria Hospital, Ikotun, Lagos.

While the Ugwuokes were insisting that the medical bill was too much for a family with an unemployed breadwinner, the hospital declined to collect the sum of N50,000 offered by a Good Samaritan.

The patient alleged that due to the family’s inability to pay the bills, the hospital stopped treating her and chained her to a “urinary pole” to prevent her from escaping. The hospital, however, denied the family’s allegation.

Jessica, who hails from Abia State, told our correspondent that she was rushed to Samaria Hospital from a maternity home after she was unable to deliver her child on August 12.

The couple lost the child during a caesarian section, leaving the family with a medical bill they said was beyond what they could afford. Jessica said,

“On the fateful day, I was rushed to Samaria Hospital as an emergency case, so we didn’t discuss price.

The patient alleged that due to the family’s inability to pay the bills, the hospital stopped treating her. She said,

“They didn’t lose my stitches until after two weeks. The day I begged him, the doctor said I should tell my husband to pay. After we paid the N45,000, the doctor removed the stitches but left the catheter.

“My husband begged him to release me so that we can pay the money in bits, but he refused. After two weeks, I was asked to leave the bed and I started sleeping on the corridor. My husband got angry and demanded that I should be released, but he walked him out of his office.”

Jessica said her husband eventually reported the doctor to a non-governmental organisation, Women Advocates Research and Documentation, adding that the NGO negotiated with the doctor to reduce the money to N80,000.
The Medical Director of Samaria Hospital, Dr. Caleb Ayanwusi, however, told our correspondent that he did not chain the patient.

He said he commenced treatment on the fateful day without negotiating price with the family because the patient was brought in as an emergency case. He said,

“When she came, she was bleeding from the vagina. On examination, we found that she had ruptured the uterus and bladder and when we passed the catheter, it was blood, instead of urine, that came out.

“I told the husband that because of the bleeding the wife needed two pints of blood which would cost N30,000. As a matter of principle we don’t demand deposit when they come in like that.

“She had been in a nurse’s house for about two days without delivering the baby. She was told where she registered that she could not have the baby except through surgery, but because they did not have money and the husband knows the nurse, he asked her to help his wife to deliver the baby.

“In the process, she ruptured both uterus and bladder. When they brought her in, the husband said he was going to bring money. After waiting for some time I had to arrange for blood and commenced surgery.

According to the doctor, Ugwuoke came in after seven hours without the money, adding that he had commenced treatment with expensive drugs, such as Rocephin.

“He said the person who promised to send him money, failed to do so, adding that he would pay the next day. That was how the problem began,” Ayanwusi said.

The doctor added that he had told the family before the surgery that the catheter would be retained in the patient’s system for a minimum of 21 days. He added,

“I told them that she needed special attention, that if something goes wrong, she would be bedwetting, and it would have been wickedness on our part to repair the uterus and leave the bladder. What it implies is that she would have been wetting the bed and if she wanted treatment elsewhere, it would cost her money and time.”


He said the patient’s husband eventually came on August 16 with N10,000, and later asked for the bill so he could solicit funds from friends and family.

“I got angry because she brought her son, who is about 10 years old, to stay with her and other women in the ward. She was not the only patient there, and the boy was living there and I asked the husband that he should pay the bills and take the wife home. That was why I discharged her to the floor,” he added.

When our correspondent contacted the NGO, the Director, Mrs. Abiola Akiyode-Afolabi, said the woman had been discharged after she negotiated with the doctor, but the medical bills had yet to be paid. Describing the issue as a complex case of poverty, she said her organisation had promised to pay N50, 000.

“The man had provided service so he had the right to be paid. The only thing he did wrong was to keep her there against her will,” she added.

Akiyode-Afolabi, however, said her organisation could not talk to the patient’s husband as he did not show up during the negotiation with the doctor. As of the time of filing this report, the doctor said he had yet to any receive payment from any source. The patient also said,

“I am home now and people have been calling me on the telephone, promising to pay the bill, but I haven’t heard anything. The agreement is that if I get well and start working, we will pay. My husband is a plumber and he is out of job,” she said.

Posted by Unknown at 9:27 am
Email ThisBlogThis!Share to TwitterShare to FacebookShare to Pinterest
Labels: NationalNews