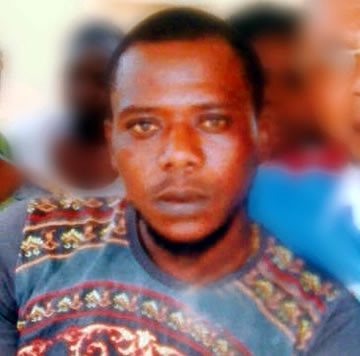 There was tension in the Ebute Oniyanrin in the Ilaje, Bariga area of Lagos on Tuesday after a police sergeant, Adekan Adesola, shot dead a 33-year-old man, Abiodun Balogun.

The police, however, said Abiodun, known as Anarchy, was a wanted cultist, and died during an exchange of fire. Punch learnt that Abiodun, who worked as a moulder in a block industry, had been called by a friend at about 8am to come to the Oniyanrin area as Sallah gifts were going to be shared by politicians.

It was gathered that Abiodun, who reportedly went with an unidentified friend, was however, manhandled by the police sergeant. It was learnt that Adesola, who was not in uniform, allegedly dragged Abiodun on the ground, before shooting him. Abiodun’s friend was said to have escaped from the scene.

Our correspondent gathered that the deceased’s mother, Aishat Balogun, who was called on the telephone that her son had been shot by a policeman, had gone to the Bariga Police Division, where the sergeant was attached and where the corpse was taken to.

The woman was reportedly barred from entering to see Abiodun. When PUNCH Metro visited Ajileye Street where the Baloguns’ lived, sympathisers lamented the death.

Aishat, who spoke with our correspondent in Yoruba, claimed that the police sergeant had been looking for Balogun as a result of her son’s refusal to join the Eiye cult group which dominated the area. She said,

“I was still with him on Monday, and we were discussing how we would celebrate the Sallah. I did not know that evil was lurking. It was around 8am today (Tuesday) that someone called me and said the sergeant had shot Abiodun dead. The lie they are spreading now is that he was a cultist.

“But the fact is that Adesola is a notorious policeman in our area. He has been shooting at people, claiming that they are cultists. But Abiodun was not a cultist. They had been luring him to join them, but he refused. I do not know the fate of my son presently. I have not been allowed to see him at the police division.”

Our correspondent, however, learnt that the corpse was still at the Bariga Police Division as of the time of report. Abiodun’s wife, who did not want her name in print, said they were together in the morning when her husband received a call that he should come for Sallah gifts at the Oniyanrin area. She said,

“We were together till around 7am when that phone call came in. So, he went to the area to collect his gift.

“That was where Adesola met and shot him. The policeman was in mufti, and Abiodun was not carrying a gun. He did not have any weapon.”

Other workers and friends of the deceased at his block industry who spoke with PUNCH Metro claimed that Abiodun was murdered in cold blood by the policeman.

The Lagos State Police Public Relations Officer, DSP Joe Offor, however, said Abiodun was a wanted cultist by the police, adding that the 33-year-old was shot dead during an exchange of gunfire.

He added that the matter had been transferred to the Special Anti-Robbery Squad, Ikeja, for further investigation. He said,

“He was a wanted cultist by the police. He died during the exchange of fire. He was known in the area as Anarchy. The case has been taken to SARS for further investigation.”

Posted by Unknown at 9:44 am
Email ThisBlogThis!Share to TwitterShare to FacebookShare to Pinterest
Labels: Crime