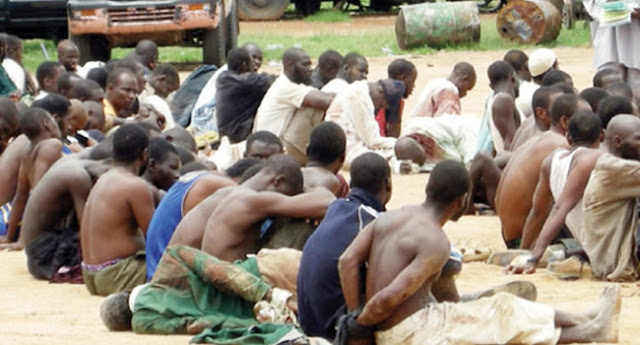 The Nigerian Army said on Friday that 200 suspected Boko Haram terrorists had surrendered after the military overran their territories along Bama-Banki axis of Borno in the ongoing anti-terrorism war.
Maj.-Gen. Yushau Abubakar, the Theater Commander, Operation Lafiya Dole, stated this while speaking with newsmen in Maiduguri.
Abubakar said that the action was a fallout of the recapturing of Banki border town from the insurgents.

``We have over 200 Boko Haram terrorists that have surrendered; the information came about 30 minutes ago.

``This is largely due to the gallant efforts of our troops.

`` I am happy to inform you that last Thursday by 5 p.m. Banki fell to our troops.

``As am talking to you now, they are right inside the Banki town''.

He said that the military had also apprehended a suspected terrorist trying to plant an Improvised Explosive Device (IED) at a mosque in Maiduguri.

``A day before Sallah, at exactly 11p.m., we were able to apprehend somebody who went on a surveillance to the Madinnatu Mosque in Maiduguri; he was trying to survey the place with a view to planting an IED.

``Luckily for us, he was caught and he is leading us to those who planted the unfortunate IEDs that killed scores of people last Sunday at Ajilari Cross in Maiduguri,'' Abubakar said.

He explained that the suspect was apprehended after some persons had alerted security agents.

``This is the kind of information that we require from the public.

``I want to assure you that we are trying all what it takes to end the insurgency in no distant future,'' Abubakar said.

Posted by Unknown at 5:34 pm
Email ThisBlogThis!Share to TwitterShare to FacebookShare to Pinterest
Labels: NationalNews