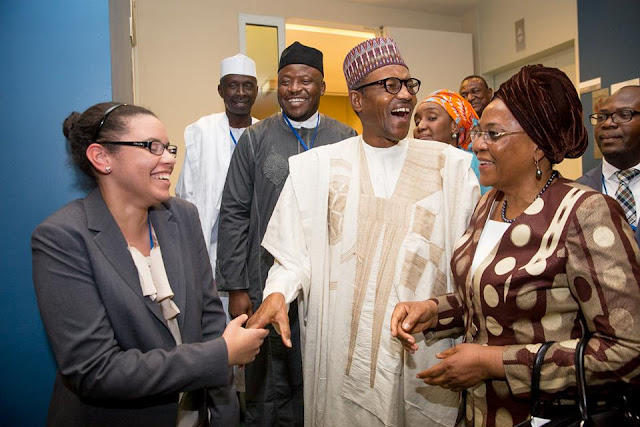 President Buhari walks out of the Assembly hall amidst joy with Nigerian Permanent Representative to the United Nations, Prof Joy Ogwu shortly after delivering his speech at the UN headquarters during the 70th UN general assembly meeting in NewYork on 28th Sept 2015

Speak 10-20: President Buhari surrounded by his excited entourage exchanging pleasantries with distinguished guests shortly after delivering his speech at the UN headquarters during the 70th UN general assembly meeting in NewYork on 28th Sept 2015. 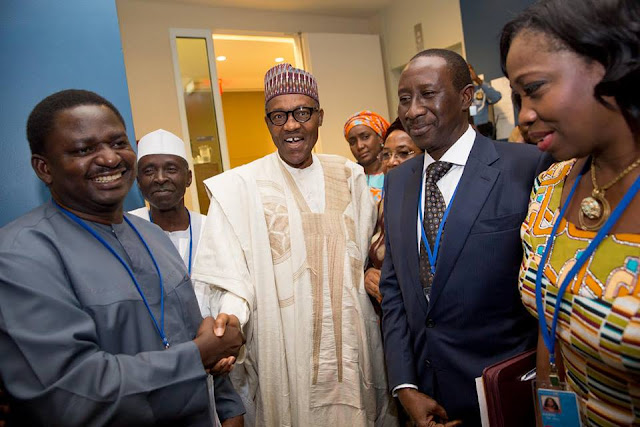 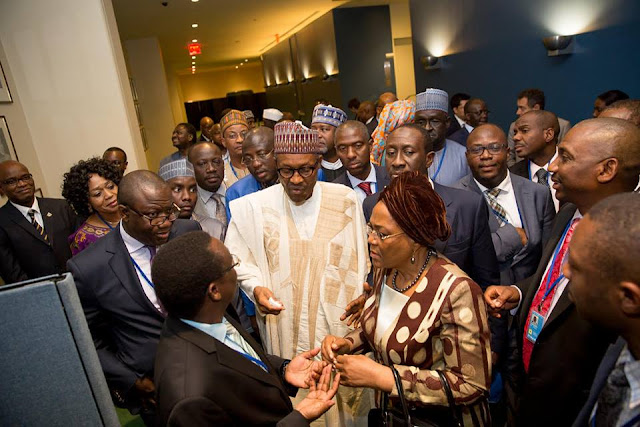 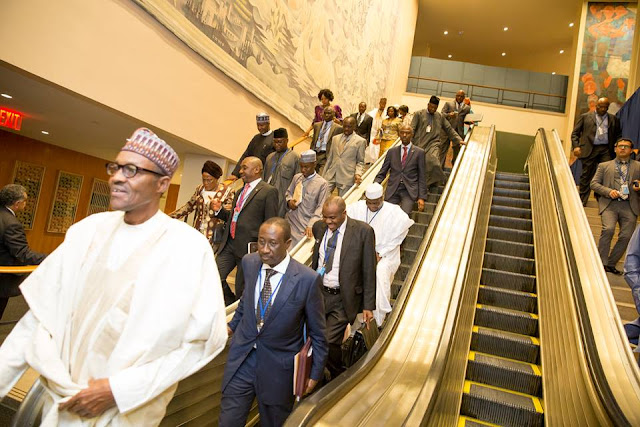 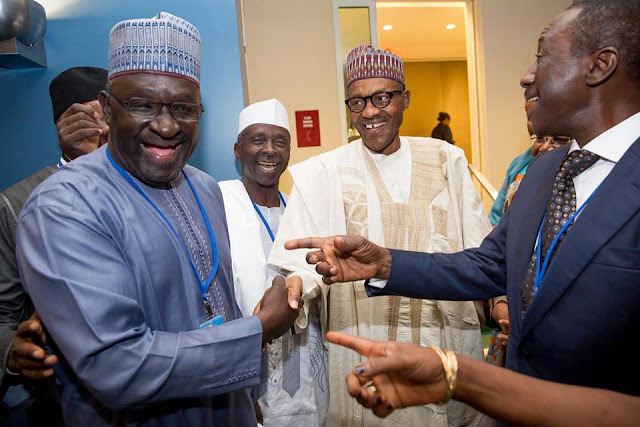 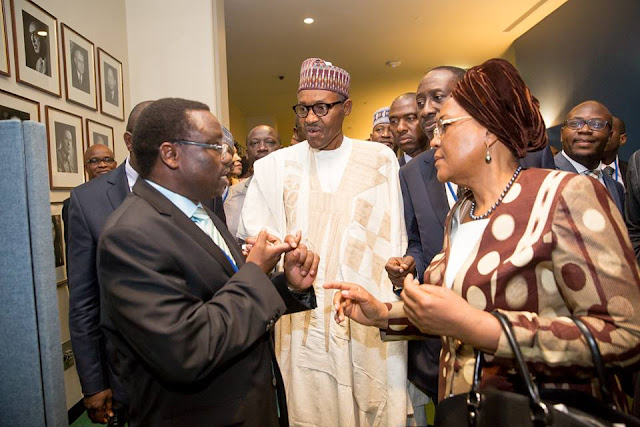 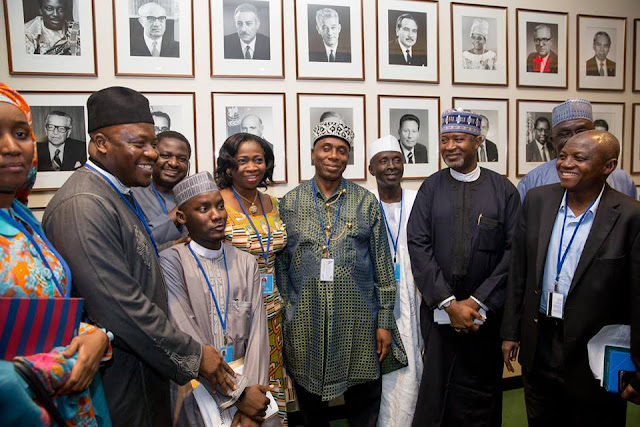 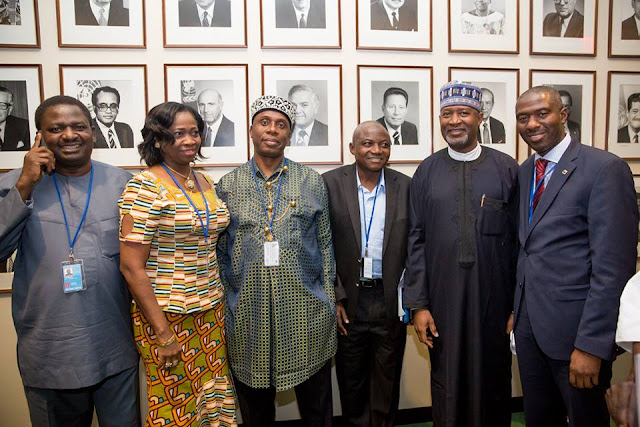 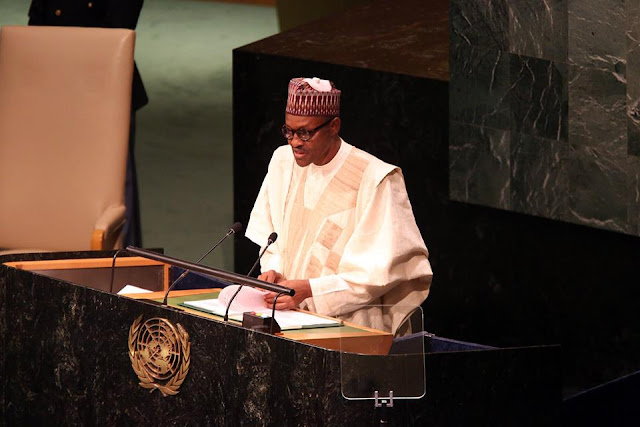 President of the General Assembly,
Secretary–General


Your Excellencies Heads of State and Governments
Distinguished Delegates
Ladies and Gentlemen,
I would like, Mr. President, on behalf of the Government and people of Nigeria, to congratulate you and your country on your election to preside over the 70th session of the U.N. General Assembly.

2. May I also express appreciation to your predecessor, Mr. Sam Kahamba Kutesa and the Secretary General Mr. Ban Ki-moon both of whom worked tirelessly to ensure proper articulation of the post-2015 Development Agenda and to maintain the focus and commitment to the ideals of the United Nations. I thank Mr. Ban Ki-moon for his recent visit to Nigeria when we held very useful discussions.

3. Fifty-five (55) years ago almost to the day, my great predecessor, Nigeria’s first Prime Minister, Alhaji Abubakar Tafawa Balewa stood on this forum to declare Nigeria’s desire to develop and maintain friendly relations with all countries. He also assured the world of our country’s commitment to uphold the principles upon which the United Nations was founded.

4. Mr. President, my country, Nigeria, has lived by this conviction, even when judgement went against us in territorial disputes with our neighbours. We respected those judgements and abided by them as a mark of respect for the rule of law and the charter of this organization. Nigeria’s record in the U.N. peacekeeping is second to none. I myself as a young officer in the Nigerian Army did tours of duty in Congo and the Lebanon.

5. Nigeria has contributed to U.N. peacekeeping efforts in Ethiopia, Liberia, Sierra Leone and Darfur. Furthermore, we are proud of our contributions to other activities of the U.N. including the Peace Building Commission, the Human Rights Council and security sector reform.
Mr. President,

6. We are gratified to note that most countries have pledged commitment to the post-2015 Development Agenda and the Sustainable Development Goals (SDGs) with their means of implementation. The successor frameworks of the MDGs have come, Mr. President, with lofty aspirations and if I may say so, heroic assumptions! Nonetheless, they target development cooperation by the international community up to the year 2020. And they deserve universal support.

7. This is because the SDGs mirror the hopes and aspirations of much of the world.

8. I should stress that for the newly adopted SDGs to be truly global, they must be practical. In this regard, the SDGs’ core objectives of poverty eradication and reducing inequalities must be met within the framework of a revitalized global partnership support by concrete policies and actions as outlined in the Addis Ababa Action Agenda.

9. Luckily, these two core objectives of the SDGs are precisely at the centre of Nigeria’s new Administration’s agenda. It must be emphasized, Mr. President, that Foreign Direct Investment supplemented where suitable by Official Development Assistance as outlined in the Addis Ababa Agenda are necessary, though not sufficient, conditions for accelerated development in countries that are trying to catch up.

10. In this connexion, I would like to appeal to industrialized countries to redeem their pledge of earmarking 0.7% (nought point seven percent) of their GDP to development assistance. With the sole exception of the UK, all concerned countries have, I am told to meet the UN requirement. But, Mr. President, with SDGs we have the opportunity to improve the lives of people not just in the developing world but in all nations.

11. The Secretary General himself has grouped the SDGs into what he calls six “essential elements” namely:
• Dignity
• Prosperity
• Justice
• Partnership
• Planet
• People
As a prerequisite to these and as we look at history and remember the terrible events that gave rise to the birth of the United Nations in 1945, I would like to propose a seventh:
• PEACE

12. Peace, Mr. President, is close to the hearts of Nigerians, as we are in the front line in the war on terror. Boko Haram’s war against the people of Nigeria, Chad, Niger and Cameroon may not attract as much worldwide attention as the wars in the Middle East but the suffering is just as great and the human cost is equally high.

13. This is a war about values between progress and chaos; between democracy and the rule of law. Boko Haram celebrates violence against the weak and the innocent and deplorably, they hide behind their perverted interpretation of Islam. Boko Haram is as far away from Islam as any one can think of.

14. Many of my colleagues attending this forum would want to know how our new government intends to tackle the huge problems the government has inherited. Friends of Nigeria and foreign investor partners will be encouraged to know that the new Government is attacking the problems we inherited head-on.

15. We intend to tackle inequalities arising from massive unemployment and previous government policies favouring a few people to the detriment of the many. We intend to emphasize quality technological education for development and lay foundation for comprehensive care of the aged, the disadvantaged and the infirm. But for now terrorism is the immediate problem.

16. Accordingly, Mr. President, Members of the General Assembly, the new Nigerian Government which I have the honour to head, moved with dispatch to put in a bold and robust strategy to defeat Boko Haram. Nigeria and her neighbours Cameroon, Chad and Niger plus Benin are working together to face this common threat within the regional framework of the Lake Chad Basin Commission. We have established a multinational joint task force to confront, degrade and defeat Boko Haram.

17. We have driven them away from many of their strongholds, killed or captured many of their operatives or commanders and freed several hundreds of hostages.

18. Mr. President, one of our major aims is to rescue the Chibok girls alive and unharmed. We are working round the clock to ensure their safety and eventual reunion with their families. Chibok girls are constantly on our minds and in our plans.

19. Mr. President, terrorism is by no means the major or the only evil threatening and undermining the wellbeing of societies around the world.
• Corruption
• Cross border financial crimes
• Cyber crimes
• Human trafficking
• Spread of communicable diseases
• Climate change
• Proliferation of weapons


are all major challenges of the 21st century which the international community must tackle collectively. Let me reaffirm Nigerian government’s unwavering commitment to fight corruption and illicit financial flows. By any consideration, corruption and cross border financial crimes are impediments to development, economic growth, and the realization of the wellbeing of citizens across the globe.

20. Nigeria is ready and willing to partner with international agencies and individual countries on a bilateral basis to confront crimes and corruption. In particular, I call upon the global community to urgently redouble efforts towards strengthening the mechanisms for dismantling safe havens for proceeds of corruption and ensuring the return of stolen funds and assets to their countries of origin.

21. Mr. President, the world is now facing a big new challenge: human trafficking. This is an old evil taking an altogether new and dangerous dimension threatening to upset international relationships. We in Africa are grieved to see on international networks how hundreds of thousands of our able bodied men and women fleeing to Europe and in the process thousands dying in the desert or drowning in the Mediterranean.

22. We condemn in the strongest terms these people traffickers and will support any measures to apprehend and bring them to justice. At the same time, we are very appreciative of European governments notably Italy and Germany, for their understanding and humane treatment of these refugees.

23. Last year, our continent faced the dreadful occurrence of Ebola. We sincerely thank the international community for the collective efforts to contain this deadly disease. We are not out of the woods yet but we would like to record our appreciation to the United States, United Kingdom, France and China for their outstanding assistance in arresting the spread of Ebola and care of those infected in collaboration with host countries.
Mr. President,

24. Nigeria fully subscribes to and fully endorses Goals 13, 14 and 15 of the SDGs regarding Climate Change. In Nigeria, desertification and land erosion and degradation leading to biodiversity loss are real threats to our environment and we shall propose under the auspices of the Lake Chad Basin Commission a regional approach to combat these environmental challenges.

25. We look forward to the UN Summit on climate change in Paris in December 2015. This summit should provide optimism to humanity on addressing the looming threat faced by many communities around the world.


26. We are witnessing a dreadful increase in conflicts fuelled by availability of small arms and light weapons. I call upon all member countries to demonstrate the political will needed to uphold the UN charter. For a start, a robust implementation of the Arms Trade Treaty will guarantee that small arms and light weapons are only legally transferred. Arms traffickers and human traffickers are two evil species which the world community should eradicate.
Mr. President,

27. As we engage in these annual debates, we need remind ourselves of the principles that led to the founding of the United Nations. Among those are peaceful coexistence and self-determination of peoples. In this context, Mr. President, the unresolved question of self-determination for the Palestinian people and those of Western Sahara, both nations having been adjusted by the United Nations as qualifying for this inalienable right must now be assured and fulfilled without any further delay or obstacle.

28. The international community has come to pin its hopes on resolving the Palestinian issue through the two – states solution which recognises the legitimate right of each state to exist in peace and security. The world has no more excuses or reasons to delay the implementation of the long list of Security Council resolutions on this question. Neither do we have the moral right to deny any people their freedom or condemn them indefinitely to occupation and blockade
Mr. President, delegates of member countries,

29. UN is 70 years old. It can count many more than 70 major achievements as the world’s forum and family reunion. It is my hope that in the next 70 years, it will achieve control of climate, help to eliminate communicable diseases, eliminate major and local conflicts and therefore eliminate the problem of refugees, take major steps towards reducing harmful inequalities between nations and within nations and above all, eliminate nuclear weapons.

30. Mr. President, as this is my first address in this Assembly, I thank you and the delegates for listening so patiently. 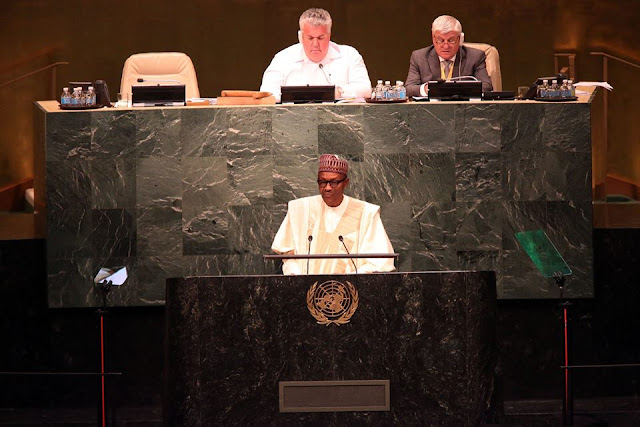 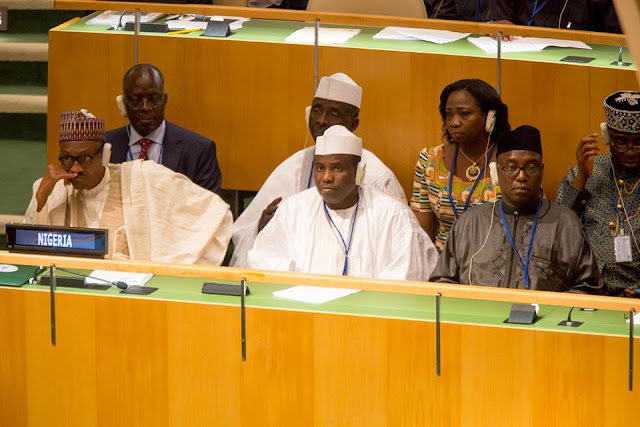 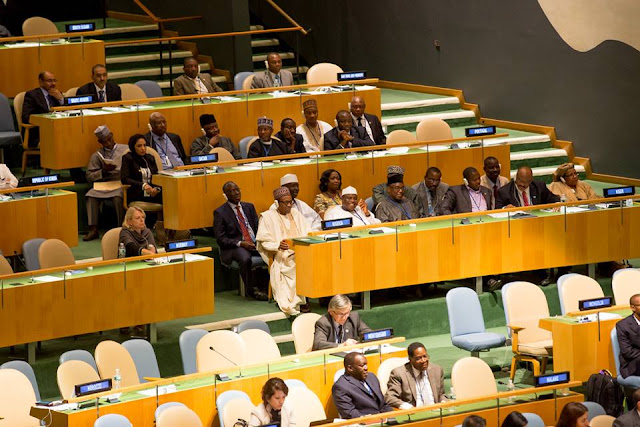 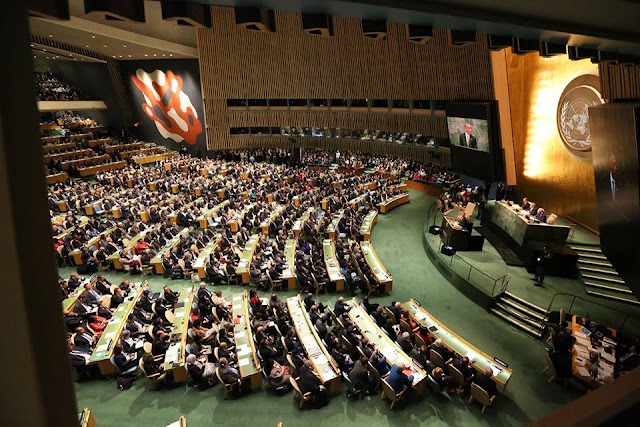 Posted by Unknown at 11:01 am
Email ThisBlogThis!Share to TwitterShare to FacebookShare to Pinterest
Labels: NationalNews