Prophet Kills Self in C&S Church Over Rejection 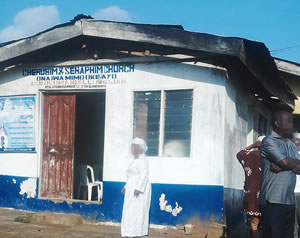 A man, identified simply as Prophet Wale, has killed himself in a Cherubim and Seraphim Church, Ona Iwa Mimo, on Otunba Bamidele Street, in the Ikotun area of Lagos State. The victim had approached the owner of the church, a prophetess, to be part of her ministry.

He reportedly claimed to be a prophet and said he would love to assist her. The prophetess rejected the offer, and the victim became angry. He was said to have grabbed a bottle, broke it and stabbed himself in the neck.

The matter was reported at the Ikotun Police Division on Wednesday. When our correspondent visited the community on Thursday, he observed that many of the residents were reluctant to discuss the incident.


At the church, a man, who identified himself as Noah, declined comment. He said no relatives of the suspect were available for comment.

“The prophetess family members are not available for now. My phone is also dead; so I cannot even give you my contact,” he said.


When Punch approached the community leader, Otunba Bamidele, he said he was not aware of the incident.


“I travelled and just came back this morning; please I have nothing to say and I am not aware,” he said.

But some of the residents, who spoke with PUNCH Metro on condition of anonymity, confirmed the incident. They said the victim’s death caused commotion on the street, adding that policemen from Igando, Ikotun and Idimu divisions trooped to the street in three vans. A witness said,

“It was around 5pm. I was passing by and I saw a crowd of people on the church premises. Policemen and three police vans from Ikotun, Idimu and Igando police divisions were there.

“The police took the corpse and arrested the owner of the church. I cannot tell what led to the death because I don’t live with them. I don’t know the man. He is a stranger in this community.”

Another resident said the victim was likely to be one of those sleeping in the church.

“Many people sleep in that church and something could have led to his death. It could have been frustration and it might be something different,” he said.

A police source, however, revealed to our correspondent that the victim was from Apapa area of the state. The source said the prophetess claimed not to have known the victim from anywhere until on the morning he entered the church and offered to join her ministry. He said,

“The owner of the church is claiming that she has never met the man before.

“She said the man just came to her and said he was a pastor from Bayelsa State and he was living in Apapa, but would like to be part of her ministry.

“She claimed that when she asked for his address, and relatives, he did not answer her.

“When the woman refused to allow him, he brought out a bottle, broke it and stabbed himself to death.”


The source said the victim allegedly stabbed himself in the neck and bled to death.


“He had a deep gash in his neck. But the woman’s testimony is still under investigation and she is currently in detention,” he added.

The Police Public Relations Officer, Joe Offor, confirmed the incident, adding that the deceased was a pastor of the C&S Movement. He said,

“The man’s name is Wale and he’s a prophet in the Cherubim and Seraphim Church. The incident happened on Wednesday, 23 September, 2015. Nobody knows what made him kill himself, but all those present when he committed the act have been arrested and they are helping the police with investigations. He did it in the presence of the General Overseer of the church.”

Posted by Unknown at 7:18 am
Email ThisBlogThis!Share to TwitterShare to FacebookShare to Pinterest
Labels: Crime