Robbers Drown Inside Canal While Escaping with N13,000 They Snatched from Their Victim 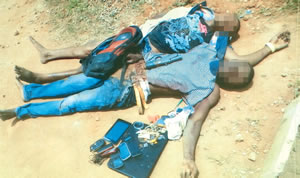 Two robbery suspects have drowned inside a canal in the Ojota area of Lagos while they were escaping with a mobile phone and N13,000, snatched from their victim.

It was gathered that the deceased were part of a five-man gang, which had unleashed terror on the Olusosun, Ojota, area, before attacking the male victim, whose name had yet to be given, at about 8pm around the Olusosun dump.

It was learnt that a local vigilance group, however, apprehended two members of the gang, and handed them over to the Alausa Police Division, while three of the robbers escaped.

Punch learnt that on Saturday, two corpses, suspected to be the fleeing robbers, were, however, found trapped inside the Olusosun canal around the dump.

When our correspondent visited the area, a construction worker, who gave his name as Saliu Ahmed, said officers of the Neighbourhood Watch gave the robbers a chase before two of them slipped into the canal. He said,

“It was a about 8pm on Thursday. I knew when officers of the Neighbourhood Watch at the Olusosun dump, gave the robbers a chase. They later got two of them and took them to the police at Alausa.

“The robbers had stolen one Nokia mobile phone and the sum of N13,000 from their victim around the dump. Three of the gang members escaped that evening. It was then surprising that on Saturday, at about 12pm, the alarm was raised that two bodies were trapped in the canal.

“When the officers came to examine them, it was discovered that the victims were two of the fleeing robbers who slipped and died in the canal. It was the police who later came to remove the corpses.”

Our correspondent learnt that the bodies had been deposited at a public morgue for autopsy.

The Lagos State Police Public Relations Officer, DSP Joe Offor, had yet to reply to a text message sent to his phone on the incident.