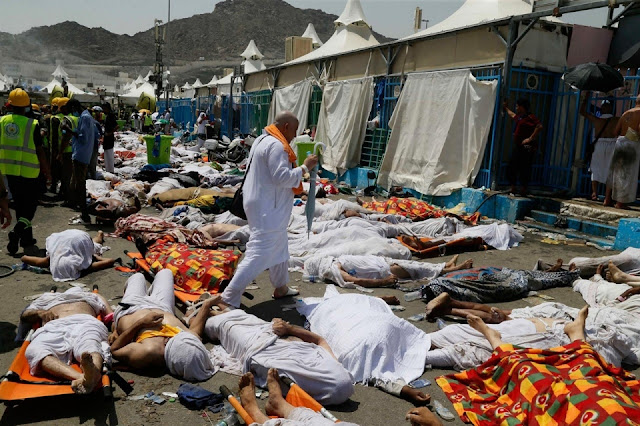 Fifty-four Nigerians have been confirmed to have died during Thursday's stampede in Mina, Saudi Arabia, News Agency of Nigeria (NAN) reports.

The confirmation was given by Alhaji Abdullahi Mukhtar, Chairman, National Hajj Commission of Nigeria (NAHCON) on Monday at a news conference in Makkah.

No fewer than 717 pilgrims died and 805 others injured in the stampede when the pilgrims trooped to perform the ritual of the symbolic stoning of the devil.

Mukhtar said 61 other Nigerian pilgrims were injured during the incident.

He said 42 of the deceased pilgrims were transported to Saudi Arabia by state Pilgrims’ Welfare Agencies, while 12 came through Private Tour Operators

The chairman also said that out of the injured 61 pilgrims, 16 were transported by Private Tour Operators and the remaining 45 by state Pilgrims’ Welfare Agencies.

He said the commission was still investigating to ascertain the number and condition of some pilgrims who have gone missing after the incident.

MuKhtar said the commission had set up three committees to condole with the families of the deceased, arrange befitting burial for the deceased and to collate information from eye witnesses.

Posted by Unknown at 5:22 pm
Email ThisBlogThis!Share to TwitterShare to FacebookShare to Pinterest
Labels: NationalNews