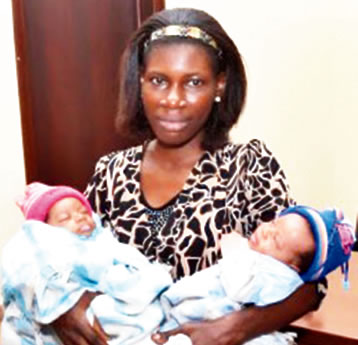 The Lagos State Police Command has arrested a woman for taking a set of four-month-old twins from their parents to defraud a retired Commissioner of Police.

Punch learnt that the incident happened on Sunday in the Agege area of Lagos State.

It was learnt that the twins belonged to Mrs. Ruth Uche, who had delivered three sets of twins and had been abandoned by her husband, Emeka, before the Lagos State Government came to her rescue recently.

Ruth, who had since been reunited with her husband, was said to have been approached by the suspect, identified simply as Victoria, saying she wanted to feature the babies in a film.

It was learnt that Ruth’s husband, however, insisted that she followed Victoria to the location of the purported film.

Unknown to the Uches, Victoria, a mother of two, had an ulterior motive.

PUNCH Metro was told that Victoria had been engaged in an illicit relationship with the unnamed retired CP and had taken photos of the kids, which she sent to him as the products of their relationship.

On the fateful Sunday, she was said to have taken the twins to the man.

The Police Public Relations Officer, Lagos State Command, Joe Offor, who confirmed the incident, told our correspondent that the unsuspecting mother of the twins, followed Victoria to the ex-commissioner’s house.

He said Ruth and Victoria began to argue over the ownership of the babies, which raised the suspicion of the former police boss. He said,

“What happened was that the woman told the Uche family that she wanted to use the twins in a film, and they believed her.

“But Ruth’s husband insisted that she accompanied Victoria. When they got to the man’s house, Victoria told him that the twins were the products of their illicit relationship; she was expecting the man to reward her.

“But the mother of the twins insisted that they were her kids. When the man saw the way they were arguing, he called policemen from the Agege Pen Cinema Division, and they were both arrested.”

He said the police had already released the mother of the twins after the suspect confessed that he deceived the Uches in order to make money off the man.

Posted by Unknown at 6:23 am
Email ThisBlogThis!Share to TwitterShare to FacebookShare to Pinterest
Labels: Crime