Woman Brutalises 13-Year-Old Maid with a Broken Dish, Hides Her From Police in Lagos 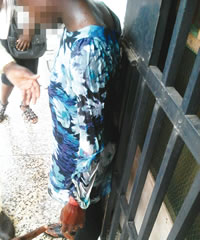 The police in Lagos have arrested a woman, Esther Bello, for allegedly brutalising her 13-year-old househelp, identified simply as Titi, in the Obanikoro area of Lagos.

Bello, a trader, allegedly hid the girl in a room and told policemen from the Pedro division, who were alerted by the neighbours, that the maid had travelled to Ikorodu area with a friend. However, Titi, who had a bleeding hand, was rescued by policemen from the room where she had been locked up.

It was learnt that on Thursday at about 1am, the maid, who was said to be from Cotonou, Benin Repubic, ran out of the house on Akinsanmi Street, Obanikoro Estate, with a bleeding hand to meet neighbours and explain her plight.

It was gathered that the neighbours, who later saw Bello, inquired why she allegedly cut her maid with a broken dish. Bello was said to have shunned the neighbours, after which the girl returned to the house.

Punch learnt that at about 7am, the neighbours went back to the house to check on Titi only to discover that the maid’s injury had not been treated, and had been given more domestic works to do. The angry neighbours were said to have reported the matter at the Pedro Police Division, which then came to Bello’s house.

Bello was said to have told the officers that the maid was no longer with her, and had gone with a friend to Igbogbo area, Ikorodu. However, after the police returned with a search warrant, they combed the house before the maid was found bleeding in one of the rooms in the house.

Bello was thereafter arrested, while the maid was rushed to a hospital for treatment.

Speaking with PUNCH Metro, one of the neighbours, who gave his name as Titus Edgar, said,

“We did not sleep early on Wednesday; we were still outside in a bar in the area till 2am. At about 1.30am, we saw the maid run out of the house, while blood was streaming from her hand.

“We observed that the hand was cut deep in three places, and the girl told us that her boss had threatened to kill her if she raised the alarm. When the woman came later, we asked her what was the matter, but she refused to say anything.

“By morning, some of us went back to the house to check what had become of the girl. When we got to the house, the girl was still bleeding and mopping the floor.

“We felt this was unfair and that was when we went to report to the police. When the police arrived, she told them that the girl had run out and was in Ikorodu.

“That was when we began to comb her house before discovering the maid.”

Another neighbour, who did not want her name in print, said Bello, who had been in the area for three years, had a housemaid named Maria, who also fled the house last year.

Our correspondent learnt that some officials of the Lagos State Domestic and Sexual Violence Response Team had gone to the police station, and taken up the welfare of the girl.

The Police Public Relations Officer, DSP Joe Offor, said he would get back to our correspondent on the matter.

He, however, had yet to get back as of press time.

Posted by Unknown at 6:33 am
Email ThisBlogThis!Share to TwitterShare to FacebookShare to Pinterest
Labels: Crime