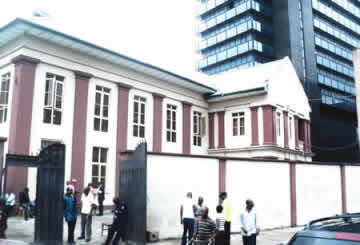 There was confusion on Wednesday at Tinubu, Lagos Island, after a suspected vandal, Johnson Ede, jumped from a car conveying him and five others to a magistrates’ court in the area.
Ede and other suspects ─ Emmanuel Peters, 29; Idris Adamu, 27; Mohammed Ahmed, 37; Salisu Adamu, 33; and 23-year-old Odichi Ochechi ─ were arrested for allegedly vandalising water pipes on Akin Adesola Street, Victoria Island and for stealing 350 metres of 12mm cables owned by Hitec Construction Company Limited on December 28, 2015.
It was gathered that 32-year-old Ede escaped through the window of the moving car with a pair of handcuffs in his hand. Punch Metro learnt that a woman corporal was taking Ede, whose name appeared as the first defendant on the charge sheet, and the five others to court when the incident happened.
Our correspondent gathered the officer was not assisted in chasing the fleeing suspect when she called for help from passersby.

Posted by Unknown at 8:03 am
Email ThisBlogThis!Share to TwitterShare to FacebookShare to Pinterest
Labels: Crime