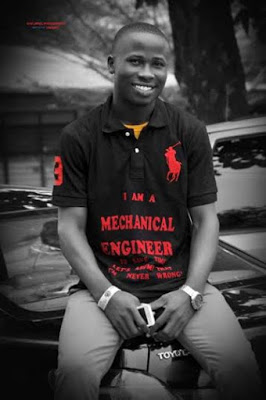 A police van driving against traffic has crushed to death a final-year student of the University of Port Harcourt, Rivers State, Edah Oghenekevwe.
PUNCH Metro learnt that the van, with number plate, NPF1791D, which was driven by a policeman, identified as Inspector John Kanu, crushed Oghenekevwe on Sunday at the Assemblies of God Church Junction, Alakahia, Port Harcourt.
According to eyewitnesses, the van was moving against the traffic when it ran into the deceased, who was said to be in the Department of Mechanical Engineering, and was returning from church.
Our correspondents gathered that Oghenekevwe was standing by the roadside at the junction, when the van swerved and crushed him.
It was learnt that the student was thereafter rushed to the University of Port Harcourt Teaching Hospital where he died.

The policemen, when contacted by the family, were said to have denied involvement in the accident.
One of the eyewitnesses, who declined to mention his name, said the policemen in the van attempted to escape when they saw the accident, but for the intervention of passersby.
He said, “After hitting Edah (Oghenekevwe), the policemen tried to escape, but they were stopped by passersby and eyewitnesses who demanded that the victim be taken to a hospital. The policemen agreed and rushed him to the UNIPORT Teaching Hospital, but they pretended as if they found him on the road and picked him up.
“I heard that they told the nurses that they were not aware of how he came about the accident. But the nurses were smart and they took down the details of one of the policemen. Unfortunately, the young man died around 7.30pm.”
The state Police Public Relations Officer, DSP Ahmad Muhammad, who confirmed the student’s death, said investigations were ongoing to ascertain whether or not the police were involved in the incident.
He said, “We received the report of the incident, and right now, we are investigating the matter. The corpse has been deposited in a morgue and it is awaiting an autopsy.
“We want to assure members of the public that there is nothing like a cover-up. Whoever is found wanting in the killing of this young man, whether it is an accident or manslaughter, will be investigated and charged to court to answer to the crime.
“As of now, we cannot ascertain the cause of his death until after a post-mortem has been carried out. We are also going to arrest the culprits after collecting statements from eyewitnesses at the scene. We cannot say for now that it was a police van.”
The UNIPORT Public Relations Officer, Dr. Willliam Wodi, confirmed that a student of the school was knocked down.
“I am currently on an official assignment till Wednesday. I will have to return to the university before I can speak authoritatively on the death of the student,” he added.
But a top management staff of UNIPORT, who asked not to be named, confirmed that Oghenekevwe was killed by the police.
She lamented that such incidents were on the increase and nothing was being done to address them.
She said, “Yes, he was our student and he was crushed to death by a police van which was moving against the traffic. We always have this problem and in the end, nothing comes out of it. Human rights organisation must rise and fight, not just for the slain student, but for every member of the varsity.”

Posted by Unknown at 8:55 am
Email ThisBlogThis!Share to TwitterShare to FacebookShare to Pinterest
Labels: Crime