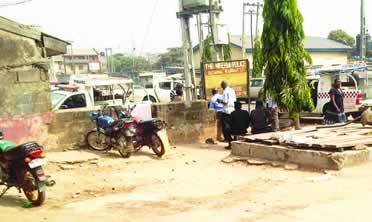 The police in Lagos State have arrested a computer teacher, Cosmos Ubaja, for allegedly raping a 14-year-old schoolgirl in the Owutu area of Ikorodu.

The victim, Victoria (pseudonym), was lured by the suspect when she went to his shop to make photocopies after school hours. Victoria, who attends a public secondary school in Owutu, Ikorodu, had been allegedly raped by the suspect on several occasions in eight months.

PUNCH Metro gathered that the victim, who is in Junior Secondary School, Class 3, was given pittances such as N50, N100 and N30, each time the suspect raped her.

It was learnt that the suspect, who owns a computer centre in the area, was contracted by the school to teach the junior pupils  computer studies.

PUNCH Metro was told that the suspect gave Victoria N30 after the latest rape, which occurred on Wednesday, June 1, 2016.

A police source told our correspondent that the bubble burst when the girl complained to her mother that she had stomach pains and her  menstrual cycle was affected.

She said, “Ubaja is married with a son. He is not a worker of the state government. The school just arranged with him to be teaching the pupils computer studies since he has a computer centre.

“He works on the school’s examination papers and answer sheets. The school is in a very quiet community. Pupils usually go to his centre to make photocopies and train with his computers.

“The suspect had been raping the girl for months. He gave her between N30 and N100 each time.  The girl kept the secret away from her parents.

“But the last time he raped her, she complained to her mother that she was having stomach pains and her menstruation had stopped. She was then taken to a private hospital.

“That was where it was discovered that she had been raped several times. The girl confessed that it was the computer instructor who raped her and he was arrested. He has also confessed to the crime.”

Our correspondent learnt that the matter, which was reported at the Owutu Police Division, was also reported to the Lagos State Domestic and Sexual Violence Response Team, Alausa.

The DSVRT team took the victim for a checkup at the Mirabel Centre, Ikeja.

The group’s Coordinator, Lola Vivour-Adeniyi, said the matter had been transferred to the Gender Unit of the Lagos State Police Command.

She said, “The matter got to our attention on Monday, June 20. The 14-year-old girl was raped by her computer teacher near the school’s premises.

“The teacher and some individuals around the school initially pleaded with the girl’s parents not to report to the police. Fortunately, they rejected the plea.

“The perpetrator is in police custody and the case has been transferred from the division to the Gender Unit at the police headquarters, Ikeja. The Directorate of Public Prosecutions has also requested the duplicate case file.”

The Police Public Relations Officer, SP Dolapo Badmos, had yet to reply to a text message sent to her phone on the incident.

Posted by Lawrencia at 9:02 am
Email ThisBlogThis!Share to TwitterShare to FacebookShare to Pinterest
Labels: Crime