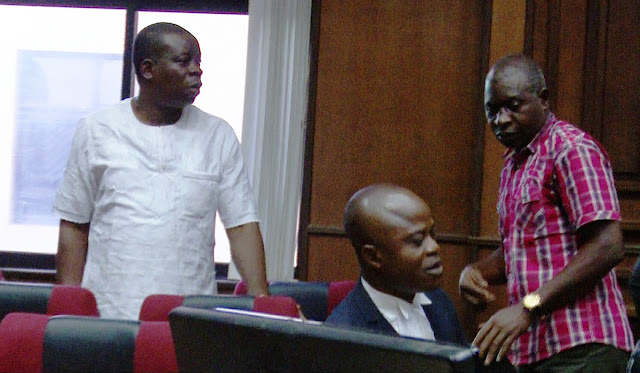 The Economic and Financial Crimes Commission, EFCC, on Wednesday, June 22, 2016, arraigned the trio of Dayo Jimoh, Victor Ochola and Obaje Musa Mohammed before Justice A.R. Mohammed of the Federal High Court sitting in Maitama, Abuja on a 27-count charge bordering on conspiracy and obtaining money by false pretense to the tune of N220, 000,000 (Two Hundred and Twenty Million Naira).

The accused persons allegedly approached the complainant, Mohammed Jibrin, Managing Director/ Chief Executive Officer, CEO, Suntrust Savings and Loans Limited, with a promise that they could help him secure some government houses purportedly being sold by the Ad-hoc Committee on sale of Federal Government houses.

However, the complainant alleged that he was issued forged offer letter and payment receipts, after he had made payment vide bank drafts to various accounts belonging to the accused persons. ‪#‎Fraud‬. ‪#‎EFCC‬

Posted by Lawrencia at 10:30 pm
Email ThisBlogThis!Share to TwitterShare to FacebookShare to Pinterest
Labels: Crime