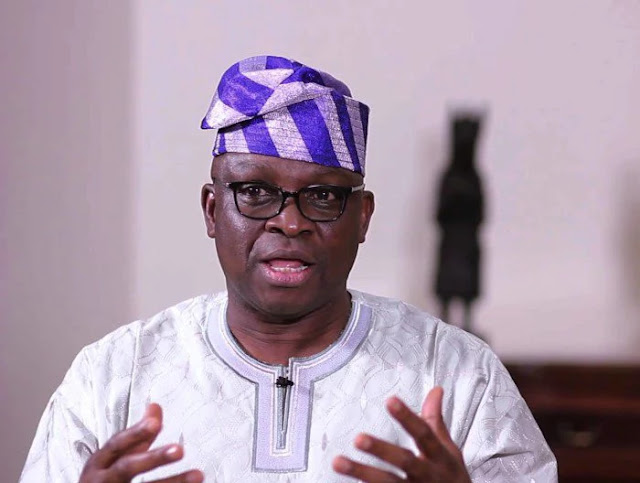 Governor Ayodele Fayose has dragged Economic and Financial Crimes Commission (EFCC) and a second generation bank before a Federal High Court in Ado Ekiti over freezing of his personal bank accounts.

The court has ordered the anti-graft commission and the bank to show cause why an Order Exparte to unfreeze the governor’s accounts, submitted yesterday by the Fayose’s legal team, should not be upheld.

The judge gave Monday, July 4 for the EFCC and the bank to appear in court with the said evidence.

Mr. Mike Ozekhome  had, through an exparte order, deposed to on June 24 by Bimpe Olatemiju sought a mandatory order unfreezing the accounts belonging to and operated by him pending the determination of his interlocutory application.

Joined in the suit are the EFCC, first defendant, and the bank as second defendant.

The order was supported by an 18-paragraph affidavit, a lone exhibit, which was a letter issued to Fayose by the bank confirming that the EFCC actually placed a restriction order on the accounts and a written address.

He also sought the leave of the court for the service of the originating summons on the defendants in their various addresses outside the jurisdiction of the court as contained on the order papers, supported by a 17-paragraph affidavit.

Ozekhome said the order was brought pursuant to Order 26, Rule 8(1) of the Federal High Court Civil Procedure Rule 2009 and Section 44(1) of the 1999 Constitution, which gives the court the discretionary powers to adjudicate on such matter.

Citing the case of Abdulaziz Nyako Vs EFCC to buttress his position that the anti-graft agency had no power to freeze Fayose’s account without valid court order, Ozekhome said the action was a flagrant negation of Section 308 of the constitution, which conferred absolute immunity on the governor against civil and criminal procedures.

He said it was appalling that the EFCC could play the ostrich to these valid constitutional requirements.

Delivering his ruling, Justice Taiwo Taiwo, said he understood that the applicant (Fayose) enjoyed immunity and that the court could adjudicate on the matter as canvassed by the counsel to the plaintiff, but pointed out that the relief he sought was a mandatory order of the court.

“I quite agree that the applicant has immunity pursuant to provisions of the constitution, but it is glaring that what the application he is requesting for is a mandatory order to undo what had already been done and the court cannot abdicate its duty under this circumstance.

“I am of the opinion that this mandatory order is better granted with the interlocutory order being sought through an application pending before the court, because the applicant has filed all papers to this effect.

“I hereby ordered the first and second respondents to appear before this court on July 4, 2016 and show cause why the order should be refused.

“This is not a refusal of the order, I have not refused it, but I only put it in abeyance which I said without prejudice to what will be the position of the respondents.

“But a leave is granted for the service of the defendants with the originating summons in their respective addresses as contained on the order papers,” the judge ruled.

Posted by Lawrencia at 9:39 am
Email ThisBlogThis!Share to TwitterShare to FacebookShare to Pinterest
Labels: NationalNews