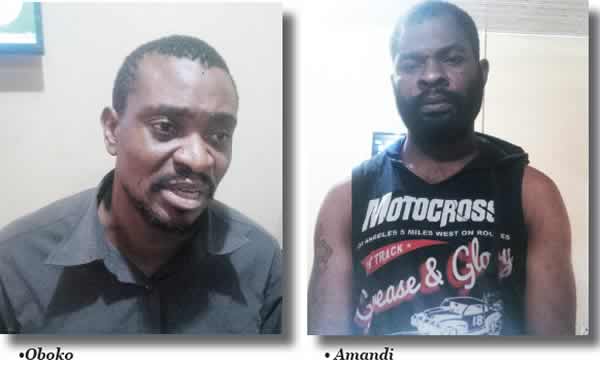 In a series of shocking revelations, an armed robbery suspect, Chris Oboko, a corporal attached to the C4I unit of the Nigeria Police in Rivers State, has told investigators how an informant “lured” him into a gang of car snatchers.

Thirty five-year-old Oboko, who has now been dismissed from the force, was recently arrested in Port Harcourt, during a mop-up of criminal elements responsible for incessant robberies and carjacking in the state by the Inspector-General of Police Special Intelligence Response Team.

For him, the lure of armed robbery loot was something he could not simply resist. Oboko, who joined the force in 2003 said he was living at the police barracks on Iche Street, Borokiri, Port Harcourt, while ‘moonlighting’ as a robber.

He said in his statement, “In 2015, I met Johnpaul Amandi, one of our informants when he took two vehicles he stole from one of his kidnapping victims to one Victor Nwogu to sell.  I met them while they were negotiating the price and I told them I would join their operation.

“After I became a member, I always found a way to get the members of the gang released whenever they were arrested by the police. I am even the resident Pastor of Battle Axe Assembly Church at Chuba Allo in Port Harcourt. I know this business is evil and shouldn’t have joined but I could not resist the temptation.”

Oboko, who chronicled his crime spree with the gang, admitted that he led three other members of the gang to snatch a Toyota Camry at D-line area of Port Harcourt few months ago, which his gang sold for N200,000.  Out of the proceeds, he said he got N70,000.

The suspect said on their second operation, three of them stole three Toyota Camry cars from the D-line motor park in Port Harcourt in a single day.

He said, “Victor Nwogu in Owerri is the one that helped sell off the vehicles. He gave us N360, 000 after selling the cars and I got N150, 000 as my share.  I remember that we also snatched a Toyota Corolla from Elelanwo area of Port Harcourt.

“I pointed a gun at the driver and he ran out of his vehicle. We sold that one for N250,000 out of which I got a share of N80,000. There was a Toyota Spider we also snatched at gunpoint around GRA in Port Harcourt. We hid it somewhere at Borokiri Sand Field.  But before we arrived there in the morning, the car had been removed.”

Through the confessions of other members of the gang, Saturday PUNCH learnt that Oboko was also the armourer of his gang. Apart from that, he allegedly used his police identity to give the members of the gang safe passage anytime they stole or snatched a vehicle.

A police source disclosed that in one of the robbery cases that Oboko investigated as a policeman, he took two pistols away from the suspect, and rather than file them as exhibits, he converted the guns to the use of his gang.

He was also said to have perfected the process of producing fake vehicle documents for each vehicle that his gang members snatched.

Apart from this, each time they snatched or stole a vehicle, the suspect would alter the vehicle engine and chassis numbers before transporting it to the buyer,” the source said.

The arrest of Oboko came after weeks of tracking by IRT operatives, following information given by Amandi who had earlier been apprehended.

Twenty-seven-year-old Amandi, a Bayelsa State indigene, said he was a commercial bus driver before he ventured into armed robbery specialising in car snatching.

He said his gang was so good at snatching and stealing cars that on one single night, his second operation after joining the robbery gang, they got five cars.

Explaining how he met Oboko, he said, “Two friends of mine kidnapped a former local government chairman in Bayelsa State and brought two cars taken from the man to me to sell in Port Harcourt. When I was checking the cars in Nembe Waterside, Corporal Oboko and one of his colleagues confronted us and took the cars away from us.  Instead of taking the vehicles to their station, they made it theirs.

“Three months after that, he saw me on the road and asked me to forgive him and said that he would like me to work with him.  He took me to his boss at C4I and he told him that I was highly resourceful and I could become an informant giving the police information about armed robbers in the state.

“His boss told me that if I could assist with information, I would be rewarded well and I accepted.  I even gave them information that led to the arrest of big armed robbers in Port Harcourt from whom they recovered arms and ammunition.

“After one month of being an informant, Corporal Oboko said one of the cars he took from me was giving him trouble and he needed another car. He said he needed a brand new car. I told him that I had stopped stealing cars since I had started working with the car snatching gang, but he insisted. He then said I should not worry and said that he would follow me to wherever I wanted to steal the car.

“On our first outing together, we stole a Honda ‘End of Discussion’. He gave his father the first car and started using the new one.  He then encouraged that we should go for more robberies because he had seen how easy the first operation was.  He also arranged with Victor in Owerri, who received and sold the vehicles for us.”

Amandi said he did many operations in the night with Oboko but that whenever he was arrested, the policeman always came to his rescue by simply telling whoever had arrested him that he was an informant working for the C4I.

But it seemed car snatching in the night was not enough for Oboko.

Amadi said he told him one day that he was tired of operating in the dead of the night and said they needed to graduate to car snatching at gunpoint in broad daylight.

He said, “I thought Corporal Oboko was joking but few days after, he brought two pistols to me.  He said he bought the guns. We snatched many cars around Port Harcourt, but even though we used to share the proceeds equally in the past, it got to a time that he started to cheat me.

“He would sometimes refuse to give me my own share and sometimes, he would not involve me in an operation. He started bypassing me to work with other boys I introduced to him.   Not long after that, I was arrested and told the police about him.”

The police have said efforts are on to arrest other members of the gang, while Oboko would be charged with armed robbery soon.

Posted by Lawrencia at 4:07 pm
Email ThisBlogThis!Share to TwitterShare to FacebookShare to Pinterest
Labels: Crime