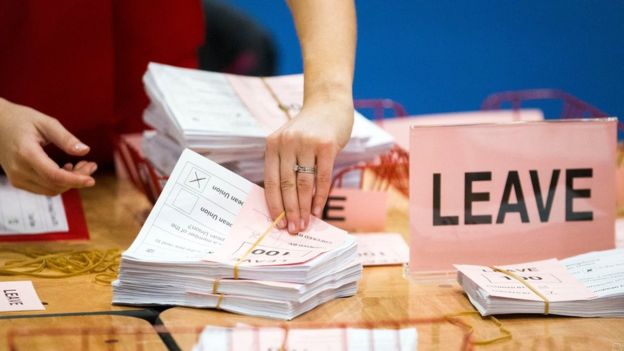 The UK has voted to leave the European Union after 43 years in a historic referendum. Leave won by 52% to 48% with England and Wales voting strongly for Brexit, while London, Scotland and Northern Ireland backed staying in the EU.

UKIP leader Nigel Farage hailed it as the UK's "independence day" but the Remain camp called it a "catastrophe" as the pound fell to its lowest level against the dollar since 1985 as the markets reacted to the results.

In almost unprecedented scenes the pound's value tumbled more than 10 cents in just a few hours. Market analysts Bloomberg reported that it was the quickest drop in the value of the pound since 1971.

And analysts said £100bn could be wiped off the value of sharres today.

Posted by Lawrencia at 8:02 am
Email ThisBlogThis!Share to TwitterShare to FacebookShare to Pinterest
Labels: InternationalNews