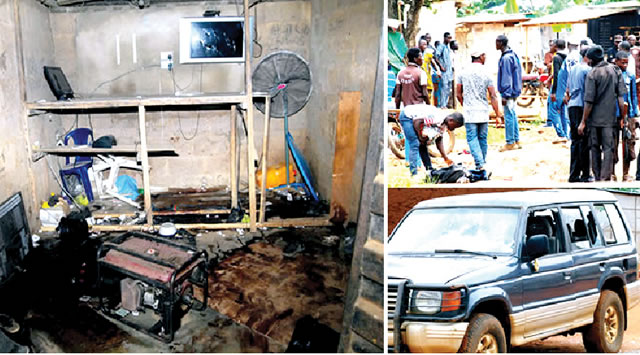 No fewer than 40 suspects have been arrested in different parts of Ogun State by the police over the killings carried out by cultists at Igode and Fakale communities, in Sagamu Local Government Area of the state, on Wednesday.

The suspects were said to have been arrested in Sagamu, Ijebu Igbo, Emuren, and Ago Iwoye.

PUNCH Metro had reported that some Aye cult members had laid siege to Igode and Fakale communities on Wednesday, killing no fewer than 11 persons to commemorate the anniversary.

It was reported that the cultists had gone for a rival group, Eiye Confraternity, but killed innocent residents in the melee.

They were said to have inscribed “7/7” on their victims’ heads as a sign of the celebration.

The masked hoodlums on motorcycles, reportedly from Emuren, a neighbouring community, had killed three welders returning from a worksite, before proceeding to Fakale, where they opened fire on a crowd watching a football match at a viewing centre.

Seven persons were killed in the process while four others were seriously injured and admitted to a hospital in Sagamu.

While returning to their base in Emuren, the miscreants chased a man identified simply as Otamali to his apartment in Igode, hacked him with cutlasses and shot him dead. They also shattered windows of houses and vandalised cars.

In the wake of the attacks, many residents had fled the affected communities out of fear while commercial activities had been paralysed.

However, the head of Igode community, Chief Rafiu Disu, on Friday, told Saturday PUNCH that some dwellers had started returning as the security situation of the area had improved.

Disu added that some youths suspected to have perpetrated the crime had been arrested.

He said, “The presence of soldiers and policemen in our community and Fakale is high now and now there is relative peace. Some of the residents who had left have started coming back. The police made some arrests yesterday (Thursday) evening.”

Adejobi said the state command also got information that the Aye Confraternity members were mobilising to storm Sagamu again on Friday for another attack, but quickly the command instructed the Divisional Police Officer in Sagamu and his men to mount security checkpoints on the Sagamu-Ijebu Ode Highway.

He said the command also had a hint that some traditional rulers in the affected communities were aiding and promoting the cult groups, warning that any of them found culpable would be dealt with according to the law.

He also said the command had zero tolerance for cultism and would do everything to nip their activities in the bud.

He said the cause of the fracas was the killing of a goat that a rival group was preparing for a festival.

He said, “On Wednesday, one of the cult groups went to kill the goat meant for a celebration by a rival group and the latter went back to attack them, but they did not get their targets.

“In Emuren alone, we have three suspects, they said one of them is a son to a chief, we are still investigating. We have Faleke Sultan from another community. We went on an all-round operation.

“In Emuren, which was the conflict theatre, we have Ismail Ali, Sodiq Ibrahim and Ahmed Rafiu.

“We are working on them and we are going to subdue them, it is not only in this place; all together in the state now we have arrested 40 suspects, spanning across Sagamu, Emuren, Ijebu Igbo, and Ago Iwoye.

“In Ago-Iwoye, we have arrested 17 and as I speak with you, we have information that they are coming again with their new boss to attack Sagamu, the DPO of Sagamu is on the Expressway now, they have blocked all the entrances into Sagamu.

“They want to cause problem and unrest for us in Ogun State and we are going to tackle them. There are allegations that some traditional chiefs are harbouring them and promoting the cultists.

“We are going to spread the scope of our investigation to unravel this and if it is true, any community leader that is involved in promoting cultism will be dealt with according to the Constitution. He will face the full wrath of the law.”

Posted by Lawrencia at 9:41 am
Email ThisBlogThis!Share to TwitterShare to FacebookShare to Pinterest
Labels: Gists