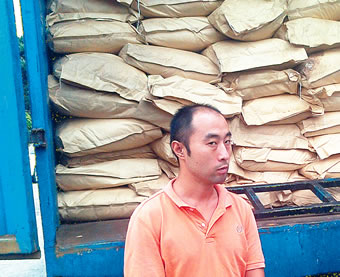 A Chinese, Zhao Chum, and a clearing agent, Christian Ohia, have been arrested by the police in Lagos State for allegedly smuggling unregistered and controlled chemicals into the country.

Chum, who owns a furniture company in Ogun State, was apprehended by officials of the National Agency for Food, Drug Administration and Control, and handed over to the police for investigations.

It was learnt that the Ports Inspection Directorate of the agency had got a tip-off that the substance, identified as Urea Formaldehyde Resin powder, was smuggled in through the Lagos sea port in two containers.

Punch gathered that the containers were allegedly taken to Chum’s company in Omu Ijebu, from where the NAFDAC operatives impounded and brought them to the agency’s office in Oshodi, Lagos State.

Thirty-three-year-old Chum said the substance was glue, meant for his furniture works, adding that he was not guilty of smuggling.

He said, “This glue is from China. Everyone can buy it. I am not an importer. I gave this job to an agent. The agent did not tell me anything. NAFDAC people came to look for the agent. After arresting him, they arrested me too.

“You can come to my factory and see what I use the substances for. It is to hold furniture together.”

A NAFDAC official, however, told our correspondent that the substances were seized by the agency because its importation was controlled, as it could be used to produce explosive devices.

The acting Director-General, NAFDAC, Yetunde Oni, who confirmed Chum’s arrest, added that investigation was ongoing into the matter.

She said, “The substance is now in NAFDAC’s warehouse. The director of the company, Zhao Chum, and his clearing agent, Christian Ohia, have been arrested. They are assisting NAFDAC to unravel the supply chain.”

Posted by Lawrencia at 9:37 am
Email ThisBlogThis!Share to TwitterShare to FacebookShare to Pinterest
Labels: Crime