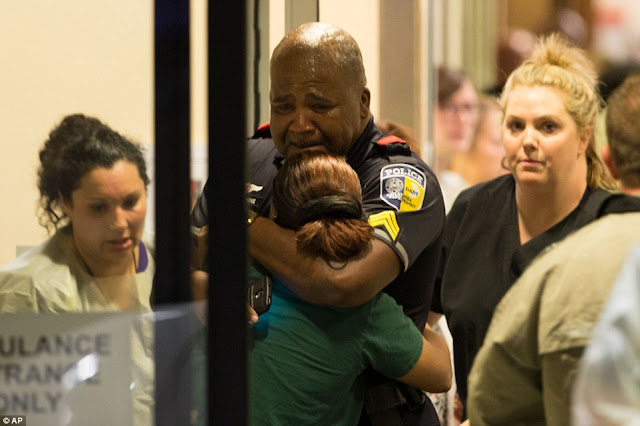 Four gunman have shot 11 police officers - killing at least five - and may have planted a bombs 'all over' downtown Dallas. One of the police officers killed in the attack has been identified as 43-year-old Dart Officer Brent Thompson.

The shooters opened fire from 'elevated positions' in a coordinated attack, picking off officers 'ambush style' as they manned a protest over the deaths of two black men, police chief David Brown said.

Three of them are in custody. A fourth man, who was engaged in a shootout with police from a parking garage, has reportedly killed himself with a shot to the head, Fox 4 TV Dallas reports. The gunman told officers bombs have been planted across Dallas and that 'the end is coming'. 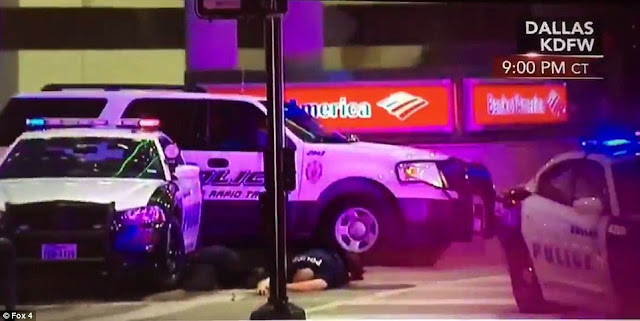 Officers found a suspicious package near where one of the gunmen was caught and a bomb squad are dealing with it.

Police said two people are being questioned after they were spotted speeding away from the scene of the shooting in a black Mercedes.

Five police officers have died and as many as three others are in a critical condition. A female member of the public was also shot.

It is not known if the shooters were protesters, however they appear to have been militarily trained. Their motive is not clear. 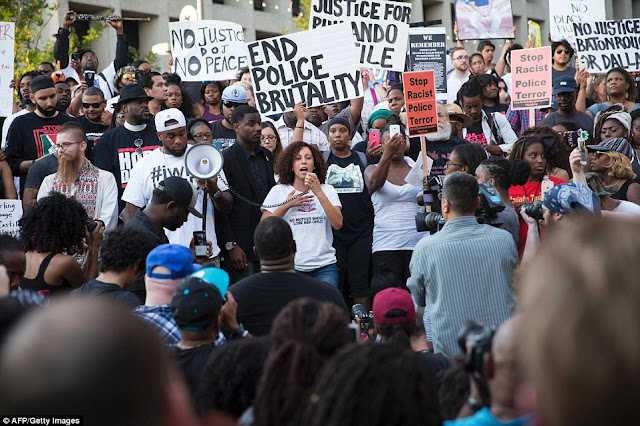 Hundreds of people had marched through Dallas peacefully earlier on Thursday, demanding justice for Alton Sterling and Philando Castile, who were shot dead by police.

For the third night in a row, thousands of people protested outside the store in Baton Rouge where Sterling, 37, was shot dead by police in the early hours of Tuesday morning.

Meanwhile tensions continued to escalate in St Paul after the shooting of Philando Castile, where hundreds more people marched through the streets with signs labeling police officers 'murderers'.

The huge swell of protests is in response to the shootings of Sterling and Castile, who were both apparently not posing a serious threat to police officers when they were fatally shot.

Sterling, a street seller in Baton Rouge, was tackled to ground by officers after a 911 call was made - allegedly by a homeless man - about a black man who had flashed a firearm.

Officers Howie Lake and Blane Salamoni pinned the father-of-five down before firing six shots at Sterling, who had a gun in his pocket but did not appear to make any attempts to take it out during the confrontation.

Sterling was on probation and should not have been carrying a weapon. It is not clear which of the two officers - who are now on administrative leave - fired the shots.

It also emerged that Lake was previously suspended for his involvement of the shooting of another black man in December 2014.

There were claims of an attempted cover-up after police seized CCTV footage from the store where Sterling was shot, however it is now understood that the footage will be handed over to federal investigators.

The store's owner, Abdullah Muflahi, said the video and his entire surveillance system was taken without a warrant. 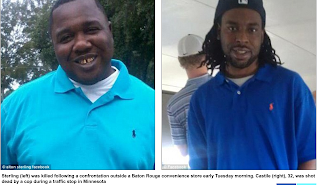 Castile was shot by an officer in St Pauls, a suburb of Minneapolis, on Wednesday after his car was stopped for a routine traffic stop.

His girlfriend, Diamond Reynolds, insisted that police had stopped them for a busted tail light, which she claims wasn't even busted, and that Castile told the officer he had a firearm on him and a license, before the cop began shooting 'for no reason'.

She livestreamed the moments after the shooting on Facebook, showing Castile dying in the front of the car as blood seeped from his chest.

Hundreds of people gathered in Times Square and Union Square in New York on Thursday to protest against the shootings, with tensions bubbling over.

Posted by Lawrencia at 9:29 am
Email ThisBlogThis!Share to TwitterShare to FacebookShare to Pinterest
Labels: InternationalNews