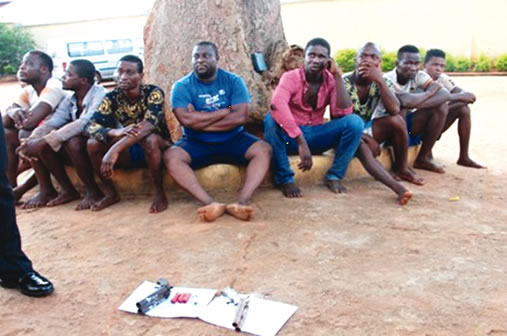 The Anambra State Police Command on Monday paraded a nine-man gang that had been terrorising Nanka community in Orumba North Local Government Area of the state.

Members of the gang led by one Ifedilichukwu Nwankwo allegedly chopped off one of the ears of a Divisional Police Officer of Ajali Division (name withheld) who was at Nanka to effect their arrest.

Parading the suspects at the State Anti-Robbery Squad office at Awkuzu, Oyi Local Government Area, the State Police Public Relations Officer, Mr. Ali Okechukwu, said the Nanka community had been liberated by the arrest of the gang.

Okechukwu said, “On 17/02/2016 at about 9am hours, one Okechukwu Udezuka of Oraifite and Ebuka, surname unknown, were shot dead at Tarzan, Nkpor by a gang of armed robbers.

“In the course of investigation, two persons namely Emamanuel Nwabudu, Chigozie Nweke, a.k.a Achito, were arrested.

“The suspects named one Ifedilichukwu Nwankwo of Nanka and others as those that attacked and killed Okechukwu Udezuka and Ebuka.

“Every attempt to arrest Ifedidilichukwu and his gang members proved abortive.

Okechukwu said that on 27/06/2016, following a raid of Nanka community, Ifedilichukwu Nwankwo, Chidi Nwankwo and Udoye Kenechukwu were arrested.

The PPRO said, “Before now, the gang led by Ifedilichukwu Nwankwo has on several occasions prevented the police from force CID Abuja, Zone Headquarters Umuahia, from making any arrest at Nanka.

Okechukwu alleged that the gang burnt down a police Hilux Jeep during an arrest in the community.

“The DPO Ajali was robbed of his handset and sums of money. He was stripped naked and one of his ears chopped off. Equally, his official uniform was torn to shreds.

“The DPO, who narrowly escaped death, is currently receiving treatment in an undisclosed hospital.”

Posted by Lawrencia at 1:21 pm
Email ThisBlogThis!Share to TwitterShare to FacebookShare to Pinterest
Labels: Crime