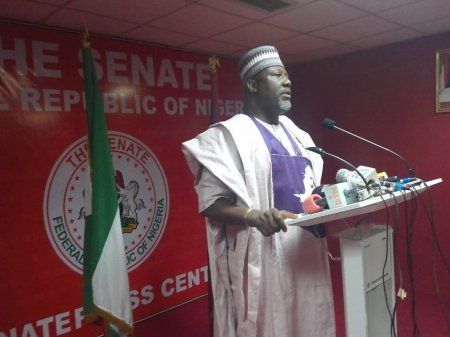 Senator Dino Melaye held a press conference over the allegation that he said he will beat up Senator Oluremi Tinubu, a fellow Senator at the upper chambers.

According to reports, Sen. Melaye recent threatened to ‘impregnate’ and beat up Sen. Remi Tinubu, during a heated argument at a closed-door meeting held by senators on Tuesday, after Mrs Tinubu allegedly said he threatens people like a thug.

During the press conference, Melaye dismissed the allegation of using “insolent, abusive, degrading & unmannerless language against any Senator.” Melaye said:

“I did not use any insolent words. I did not mention the name of any senator, unfortunately, when Remi Tinubu stood up to speak, she mentioned my name and said she is being harrased in this chamber by Melaye.


She said why will he come here and threaten senators and there was a loud chorus from the senators saying ‘how’. She said again, this thug must be tamed and I got up and said she is very stupid. She called me a dog and I reacted and said this is not bourdilllon.

I’m an not one of those senators that prostrate for her at Bourdillon. And I will never ask her for political help but she kept on shouting dog, dog! Because she acted the way she did, not one senator went to defend her. I did not leave the space of my sit."

He said that he saw on social media that Tinubu said that this was the end of his political career. To this, he said:

“Tinubu is not God. I don’t fear souls, I only respect souls. She and her husband appealed to me to back off Saraki.

He is my brother and my friend. It will not change in the four years of the Senate. I want to be the president of Nigeria. There has been a lot of misinformation, lies and blackmail. I want to assure everyone that I remain resolute in my personal conviction.

This is the true story of what happened. It is biologically impossible to impregnate Tinubu because she has reached menopause. How can you say you want to impregnate someone but still want to beat the person.

It is absurd for a woman to look at her colleague and call him a thug and a dog. Unfortunately I do not have the anointing to be quiet when I am being insulted and I responded accordingly. If tomorrow Tinubu calls me names, I will respond accordingly."

Posted by Lawrencia at 4:56 pm
Email ThisBlogThis!Share to TwitterShare to FacebookShare to Pinterest
Labels: NationalNews