I Want More Than a Round of Sex, I Expects at Least Three Rounds of Sex from My Husband – Housewife 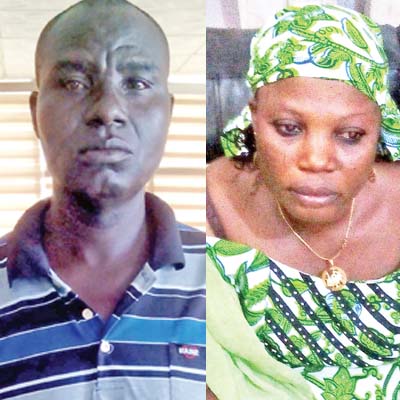 AMINU Mohammed Simpa has the dexterity of a capable man but he is not strong enough to satisfy his wife, Afusat in bed. His inability has affected the peace once enjoyed in their Ajibose Street, Agege, Lagos home.

Saturday Sun gathered that for over 13 years, the 51-year-old indigene of Obangade, Kogi State, has not gone more than one round of sex with his wife, Afusat, a constant cause of quarrel in the middle of the night. Sex is now a luxury for them. Anytime they are going to have it, they have to plan it. The wife would have informed the husband beforehand so that he would not stress himself during the day. At the end of all preparations, Simpa will still not go more than one round.

This has brought crisis into what once seems to be a happy union. Afusat, 44, complains of not getting satisfaction ev­ery time they make love. As a woman, she told Saturday Sun, she expects at least three rounds of sex from her husband.

“I expect my husband to be able to take me to orgasm whenever I wish to make love to him. But no, that is not the case; instead he would stop at one round breathing as if he just climbed a mountain. It is unac­ceptable. But I understand his predicament,” Afusat stated.

Trouble started for the father of four when he had accident while on duty at Glaxosmith­kline, Ilupeju Lagos State. Ac­cording to him, he was injured above his pelvis and was oper­ated upon. The operation from the injury he claimed affected his performance as a man.

How I became partially impotent

“I was told to work from 2pm and close by 5pm,” he contin­ued, adding “that day loading started around 5pm and the gate to the warehouse was faulty to the extent that we used plank to suspend it when we open and close it. I was in a hurry to go home because I did not inform my family that I would be com­ing back late from work. The boy offloading was too slow for my liking so I went to assist him, in the process I was hit by the bad gate.”

Simpa is in pain. He is not only suffering from his inability to satisfy his wife but also from how a company he worked for, for 15 years treated him after he sustained the injury. He was taken care of by the company during his stay in the hospital but was laid off some months later because he asked for com­pensation.

“In a place of work when an employee gets injured, they compensate them , but they did not do that, I wrote a letter to management while I was work­ing there but my supervisor said that I am still working with them and I want them to com­pensate me. He told them to put my name in the retrenchment list in 2005

“When I went back to work on the 20th of June, after four months they released the re­trenchment list and told me that my service was no longer needed, I went to meet them and they said that they wanted to reduce the number of staff.”

Simpa said effort to get the hospital remove the iron at­tached to his body has been futile since the hospital has not had any communication from Glaxosmithkline to commence treatment on him. Therefore, he resorted to taking painkillers and self-medication to survive while waiting for the company.

“I have been to hospital but they refused to treat me. Even the human resource officer that no longer works there told me that if I am not given a letter, I would not be treated. I even went to meet the doctor that op­erated on me at LUTH, but he told me to pay N5,000 before he would attend to me or recom­mend drugs that I would take. What I have been doing since then is to engage in one job or another then use the money to buy Ampiclox , Vitamin C, Pan­adol and pain relieving drugs to relieve the pains.”

If Afusat could turn back the hands of time, she would defi­nitely want those days that her husband was satisfying her sex­ual needs. Since that is no longer possible, all she could do now is to complain and bear it as her cross. Her words “I take sol­ace in the fact that I already had four children before the inci­dent. If not so, I would not have taken it easy with him. How can a man not have strength to do more than one round. It is not good. If he finishes one round he would be looking for sleep to regain strength.

“Several times, I have com­plained, even got angry with him despite knowing what hap­pened to him. Before the ac­cident, he was agile and I was always praying that no woman should have sex with him be­cause he knows how to satisfy a woman.”

According to her, she has tried all she could to improve her husband’s condition. She has introduced him to local herb popularly called ‘Afato’

“As a man of peace, he would console me and plead with me that things will improve. I have tried to help him improve it. Sometimes I would buy him drinks or tell him not to work much, yet it would always re­solve to the same thing,” she stated.

When Saturday Sun vis­ited Glaxosmithkline to verify Simpa’s claims, this reporter was directed to the company’s public relations agent, one Mrs Omolara Shittu of Brooks and Blake. The agent asked the re­porter to send an email to her. The first mail was sent to her on 17th of June and the second one on July 2nd, but as at press time, no response has come from her.

Posted by Lawrencia at 1:32 pm
Email ThisBlogThis!Share to TwitterShare to FacebookShare to Pinterest
Labels: NijaDrama