Igbo Guys are Domineering, Violent with the Crude Mentality of Women Being Totally Submissive to Them — Actress Queeneth Agbor 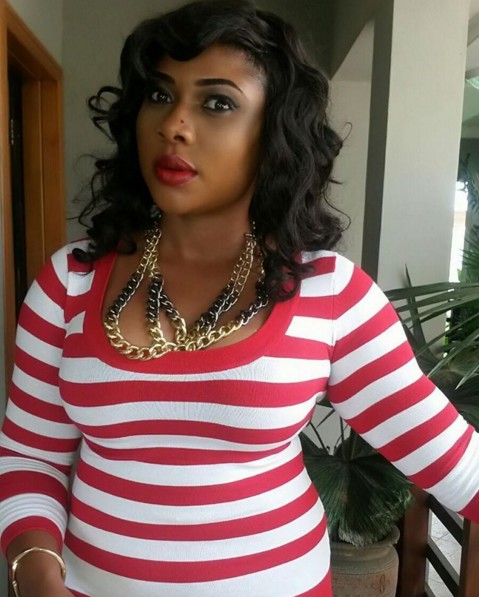 Fast-rising Nollywood actress, Queeneth Agbor, courageously took the bull by the horn when she relocated all the way from Calabar to Lagos to pursue her dream career, acting and has since been on the rise in the Nigerian movie industry. In this chat with Showtime Celebrity, Queeneth reveals a lot of interesting secrets about her sex, love and life.

You once said you will never date an Igbo guy again because your ex-boyfriend slapped you when he saw you kissing on set and he was Igbo. Kindly shed more light on this

I have nothing against Igbo guys. Not dating an Igbo, Hausa or Yoruba guy is a personal decision. I have gotten a lot of threats since the statement was made, so I wouldn’t want to talk about it. After I said this, a lot of people asked me what is with Igbo guys that I hate? The truth is, Igbo guys are domineering, and they have the tendency to be violent. They have this crude mentality of women being totally submissive to a man, the slave-like submission and I hate it.

If you have the opportunity to choose a tribe to marry, which tribe would it be?

When I start thinking of marriage I will give that a consideration. I have as well heard things about Yoruba guys that they are philanderers. At the appointed time, that is, when God says it is time, I will choose, but for now, I can’t say. On a second thought, I think I want to transfer my gene elsewhere. Mind you, I have dated a Fulani guy before (laughs). What would you do if after marriage you discover you husband is not good in bed? I’ll cut corners. Even God will understand but I will still love him. It’s not like I’m mean, it’s just understandable that sex is important in marriage.

What is your take on sex before marriage?

The truth is the bible forbids it, but I need to know what’s in the package before I get into it. Not to discover after marriage that the package is not good. That’s why some girls cheat. Imagine on the first night together after marriage and you are on the bed waiting for the action but he knows practically nothing, you then find yourself saying “Jesus! How did I get myself into this?” Two month later you are looking for the next available option, a hawk to catch as an escape route. If you had tasted the package you won’t fall such a victim. That is why I feel you have to taste it even if it’s once (laughs), Just a taste at least. I can’t cheat when in love though.

How would you describe sexual harassment?

It’s normal thing for a guy to want to have sex with a girl, but at a point where you want me to pick between two options all because you want to have sex with me, like I go for a job interview and you want to have sex with me before I can be employed, that’s sexual harassment. Why put me in such precarious situation because you’re in the position to give me something I really need? That is sexual harassment, pure harassment. Of course, it’s not bad to admire a girl, because as a girl if no one admires you in a day then you have to go back to your village and wash your head. I have never slept with a director or producer for a job. Funny enough, a year after, that same producer whom I refused to sleep with later called me for a series of jobs. In fact, he recommended me for several other jobs without asking for sex or even making a pass at me.

Can you go nude on set?

No, I can go under the bed sheet but not nude. Even for 10 million dollars I wouldn’t go nude on set (laughs).

Posted by Lawrencia at 11:05 pm
Email ThisBlogThis!Share to TwitterShare to FacebookShare to Pinterest
Labels: Gists