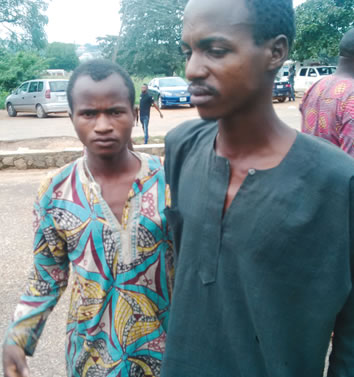 A herdsman arrested by the Oyo State Police Command for robbery, Amidu Umoru, said it was his destiny to rob despite being a herdsman.

Umoru and Umoru Sanda were accused of attacking Kehinde Rafiu along Igangan/Iganna road, via Iwere Ile in Oke-Ogun area of Oyo State, beating him with a shepherd club and machete before robbing him of his motorcycle.

While parading the suspects, Commissioner of Police in the state, Leye Oyebade, said the victim later died in a hospital because of the fatality of his injury.

Umoru, 20, said his accomplice, Sanda, first attacked the deceased with machete before he (Umoru) used the club to beat him to a state of coma because he put up a fight with them.

“Sanda cut the motorcycle owner with his cutlass and I used the club to beat him. He was seriously injured but not dead. I normally used the club to shepherd cattle. After leaving him for dead, we took his motorcycle away to sell. We were later arrested by members of the Odua Peoples’ Congress who handed us over to the police.”

Asked for the motive behind the robbery when he was already engaged as a herdsman, Umoru said he had no clear understand of why he took to the crime and that it was his destiny to rob.

“I don’t know why I did it. I cannot even ride a motorcycle. I am a herdsman and this is my first time of being arrested or robbing people. Whatever Allah desires must come to past. I think it is my destiny to rob,” he said.

Posted by Lawrencia at 6:45 am
Email ThisBlogThis!Share to TwitterShare to FacebookShare to Pinterest
Labels: Crime