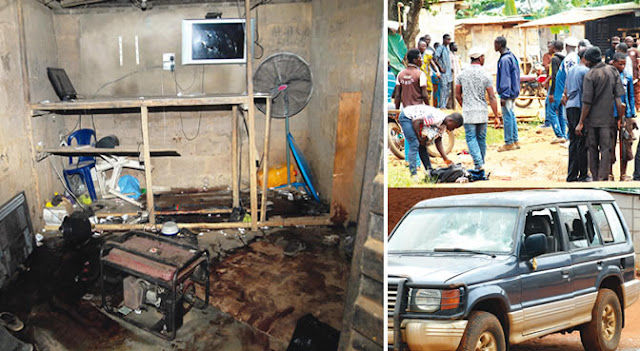 No fewer than 11 persons have been killed by suspected cult members in Igode and Fakale communities in the Sagamu Local Government Area of Ogun State.

Four persons were also injured while houses and cars were vandalised in the attack that lasted for about 10 hours.

PUNCH Metro learnt that the hoodlums, said to be Aye Confraternity members, had gone on the rampage at about 11am on Wednesday to commemorate their anniversary tagged 7/7.

The grand finale of the anniversary was reportedly held on Thursday, July 7, 2016 at Emuren, a neighbouring community.

It was gathered that the hoodlums, numbering about 25 on motorcycles, came from Emuren, wielding guns and cutlasses.

Their targets were said to be members of the Eiye Confraternity, a rival cult.The bandits, who reportedly wore masks, shot dead three welders at a junction bordering Emuren and Igode.

The welders were said to be returning from a work site on a motorcycle.

The rampaging miscreants reportedly proceeded to the Fakale community, where they opened fire on a crowd watching a football match in a viewing centre, killing seven persons.

It was learnt that one of the deceased, identified simply as Dare, was a member of the Oodua People’s Congress.

Others were identified as Ibukun, Ismaila, Sunday, and a steel rod seller, Dare Olakanmi.

Three of them were said to have been buried.

However, the police had yet to remove the remains of the three welders as of 12pm on Thursday.

Four others, who were injured, were said to have been taken to a hospital in Sagamu.

Our correspondent, who visited the communities on Thursday, observed that palpable fear had enveloped them.

Many residents were said to have fled while commercial activities had been paralysed as shops were shut.

Our correspondent saw 10 policemen at a junction in Fakale.

The Coordinator of the OPC in the community, Wole Oladunjo, said, “The fight was between Eiye and Aye confraternities. The Aye members are based in Emuren. The OPC had nothing to do with the fight. But surprisingly, they (Aye members) came here on Wednesday and started shooting sporadically. They killed seven persons in a viewing centre.

Cultists kill 11 in Ogun
Some of the victims. Photo: Segun Bakare
“One of the deceased was our member. The others killed were not Eiye members. They were hard working youths. Four persons are still in the hospital receiving treatment. The police picked four corpses and three of them have been buried.

“The policemen, who came that evening, were blaring their sirens from afar and this gave those boys the chance to escape.”

An OPC member, who identified himself as Ajibola Defence, told PUNCH Metro that the hoodlums inscribed 7/7 on those killed and on a refrigerator they destroyed inside a shop.

He said, “We learnt the Aye members are celebrating their anniversary this month. They started on July 1 and today (Thursday) is the last day. Whenever they celebrate the anniversary, they kill. They wrote 7/7 on the heads of the persons they killed.”

The Secretary of the OPC in the community, Idris Lawal, vowed that his members would avenge the killings, adding that the victims were innocent residents.

The Baale of Fakale, Chief Ganiyu Bisiriyu, lamented the security situation in Ogun State and urged the government to ensure the protection of lives and property.

“Those cultists were chased away from Lagos State and they came to settle in communities around here. The persons they killed were not their rival cultists. One of the deceased helped me to work on my farm a few days ago,” he added.

While returning from Fakale, the cult members reportedly chased a man identified only as Otamali to his apartment in Igode and shot him dead.

He called on the government to intervene and restore peace to the two affected communities.

He said, “I was in the palace on Wednesday morning when I saw about 25 men on motorcycles armed with guns and cutlasses passing through our community to Fakale. While they were coming back in the evening, they started shooting and chasing people. They chased Otamali to his apartment. He shut the door, but they broke in. They shot and stabbed him to death.

“They also destroyed a car and shattered glass windows. For over 25 years that I have been living in this community, I have never witnessed such. We could not sleep throughout the night. A lot of people have packed out in fear.”

Two rams belonging to one Olalekan Oyenuga were reportedly killed by the hoodlums.

He added that the police had restored calm to the area.

Adejobi said, “I am aware of the killings in Fakale community. We got information that some suspected Aye cult members were planning to have a party and they bought a goat. A rival group went to kill the goat and they became annoyed. They killed four persons, who were their targets.

“The Divisional Police Officer, Ogijo division, and the chairman, Sagamu Local Government Area, with some government officials, have visited the community. The police are on the trail of the suspects.”

Posted by Lawrencia at 9:45 am
Email ThisBlogThis!Share to TwitterShare to FacebookShare to Pinterest
Labels: Crime