My Mother Introduced Me to Illegal Oil Bunkering – Suspect 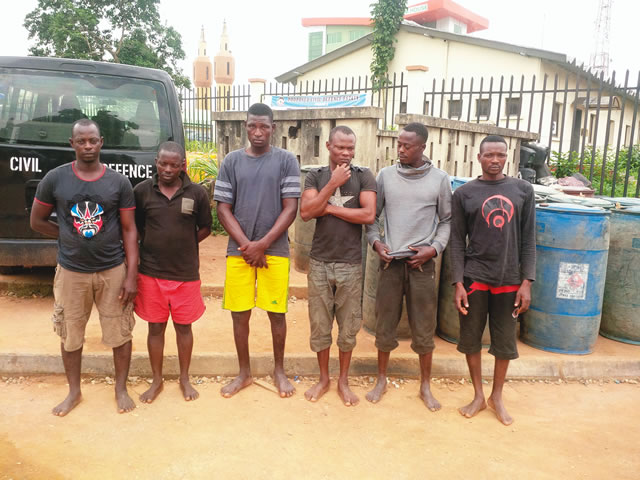 A suspected oil thief, Chemede Anre, has confessed to his involvement in illegal oil bunkering, saying his mother introduced him to the crime.

The 19-year-old fisherman was paraded on Wednesday along with five other accomplices  – Ibrahim Kwenu, 23; Savig Videjon, 20; Celestine Soru, 20; Simon Posu, 22, and 21-year-old Lekan Wesu – at the Lagos State Command of the Nigeria Security and Civil Defence Corps in Ikeja.

Anre told Punch that his mother took him to one Savie, the mastermind of the crime, when he could no longer cater to his wife and child.

He added that he was compelled to join Savie because he was not catching enough fish due to drought.

PUNCH Metro gathered that the suspects were apprehended on Friday around the Topo, Badagry area of Lagos, by the anti-vandal squad of the corps.

They were said to be ferrying 86 drums of petrol, suspected to have been siphoned from vandalised pipelines of the Nigerian National Petroleum Corporation, to Benin Republic, when they were intercepted on the sea.

Each of the drums reportedly contained 250 litres of the product.

Speaking with our correspondent, Anre, who was the boat captain, said he regretted heeding his mother’s advice, adding that Savie, who was at large, had promised to pay him and members of his crew N4,000 each.

He said, “I am a fisherman, but it has been very difficult to catch fish in the sea these days because of drought. When it became difficult to take care of my family, my mother introduced me to Savie.

“He (Savie) asked me to help him transport the fuel from Badagry to Asipa in Seme. I invited five other fishermen to carry out the job and he promised to give us N4,000 each after the deal. We were on the way to deliver the product to him when we were arrested. I know what I did was wrong and I regret my action. It was hunger that forced me into it.”

The other suspects equally blamed drought for their involvement in the act.

Videjon explained that his friend, Kwenu, connected him with Anre, saying he was not aware of the nature of the deal until the boat took off.

Kwenu said, “I am married with two children. Chemede (Anre) informed me that there was a trip that would fetch us money and since I had been idle, I agreed to go. I also invited Videjon. It was when the boat was about leaving the shore that I knew it was fuel we wanted to transport.”

Kwenu was, however, silent when asked why he did not back out from the trip when he discovered what was involved.

The NSCDC Commandant in Lagos State, Tajudeen Balogun, said his men swooped on the suspects after an intelligence report.

Balogun said the command was making efforts to arrest the kingpin, adding that the suspects would be charged to court at the end of investigations.

“Our marine unit has been on surveillance in the Badagry area for some time. The officers recovered 86 drums of 250 litres each filled with petrol, totalling 21,250 litres. Ten empty drums and one wooden boat were also recovered from the suspects.

“Investigation revealed that the product was being transported to the Republic of Benin. We plan to arrest their mastermind so that we can curb this economic sabotage,” he said.

Posted by Lawrencia at 1:23 pm
Email ThisBlogThis!Share to TwitterShare to FacebookShare to Pinterest
Labels: Crime