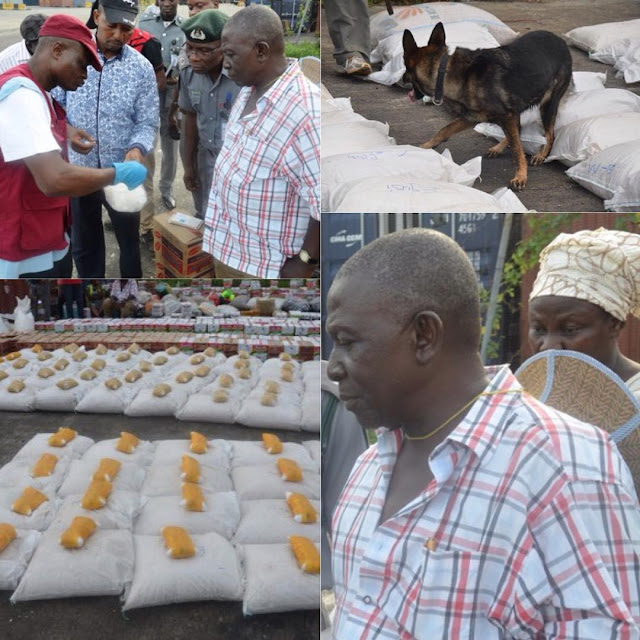 A 52-year old man, John Vincent Arinze, who claims to a South Africa based evangelist, has become an unwilling guest of the National Drug Law Enforcement Agency (NDLEA) who are quizzing him over N1.4 billion worth of narcotics found in his food stuffs at Apapa port, Lagos yesterday.

According to the Spokesman of NDLEA, Jarikre Ofoyeju, the 92kgs of methamphetamine and 73kgs of ephedrine were detected inside two containers of foodstuff meant for export to South Africa by the agency’s sniffer drugs. He added that the man was arrested in a hotel room in Lagos after the illegal goods were traced to him.

“The arrest and seizure is a product on intense undercover operation by the NDLEA. The estimated street value of the drugs is 1.4 billion.

Ofoyeju also quoted the Chairman/Chief Executive of the NDLEA, Col. Muhammad Mustapha Abdallah (retd.) as saying that the seizure has significant influence on the campaign against narcotic drugs and psychotropic substances.

“This is a product of careful planning and meticulous tracking of narcotic drugs movement. The consignments were closely monitored by our undercover agents and intercepted at Apapa Seaport, Lagos following the detection of narcotics by NDLEA sniffer dogs during screening operation. This will definitely have a positive influence on Nigeria’s drug control efforts”.

The NDLEA boss added that the Agency will remain meticulous in detecting drugs and prosecuting offenders.

“I am very happy with the success recorded in this operation. The Agency will remain painstaking and professional in the fight against illicit drug production, trafficking and abuse. We hope to unmask the drug syndicate behind this shipment and make more arrests soon,” Abdallah promised.

He NDLEA boss explained that officers successfully traced the illicit consignment to a fifty-twoA Mercedes Benz Jeep belonging to him was also impounded at the time of arrest. The suspect hails from Ara village, Nise in Awka South Local Government Area of Anambra State. John who had lived in South Africa for over a decade accepted ownership of the illicit shipment.

The suspect in his statement said that he made a big mistake by taking over the business of his late wife.

“I am an evangelist living in Durban South Africa. My late wife was into drug trafficking before she died few years ago. I made a mistake venturing into her business. It is all my fault,” he stated.

The NDLEA said the man will soon be arraigned.

Posted by Lawrencia at 5:36 pm
Email ThisBlogThis!Share to TwitterShare to FacebookShare to Pinterest
Labels: Crime