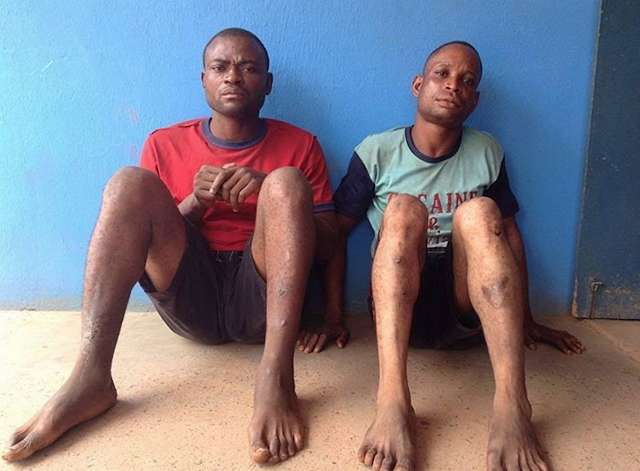 Two suspected homosexuals, Orji Odinaka, 32, and Ejineme Nonso, 22, are being held by the police in Enugu State.

The Police Public Relations Officer, Enugu State Police Command, Mr. Ebere Amaraizu, who disclosed this in a statement on Sunday, said the two men were rescued from an irate mob that wanted to set them ablaze.

He said the incident took place in the Coal Camp area of Enugu on Saturday.

Amaraizu explained that Odinaka, a commercial driver  in Enugu, was accosted by the mob after he attempted to rape one Sunday, a wheelbarrow pusher, who was in the same room with him.

“The boy raised the alarm, a development which attracted people in the area.

“Nonso, who was alleged to be Odinaka’s accomplice in the gay practice, was also accosted by the mob after another boy, Chimezie, revealed that he had been threatening him for refusing to succumb to his homosexual advances,” the PPRO added.

Amaraizu said the mob had already stripped Odinaka and Nonso naked, and was about setting them ablaze when policemen from the Enugu Central Police Station arrived at the scene.

The two men were immediately taken into custody.

Amaraizu said Odinaka told the police that he was married, but his wife left him because of his homosexual activities.

Odinaka also allegedly said he had visited several men of God for prayers in an unsuccessful bid to drop the homosexual habit.

Nonso was said to have told the police that he had left the homosexual practice until he saw the boy, Chimezie, who reported him to the irate mob.

Amaraizu said the two homosexuals were being investigated by the police.

Posted by Lawrencia at 8:09 am
Email ThisBlogThis!Share to TwitterShare to FacebookShare to Pinterest
Labels: NijaDrama