Photos of "Hyena", The HIV-Positive Man Hired to Have Sex with Children for Ritual "Cleansing"

In some remote southern regions of Malawi, it's traditional for girls to be made to have sex with a paid sex worker known as a "hyena" once they reach puberty. The act is not seen by village elders as rape, but as a form of ritual "cleansing". However, as Ed Butler reports, it has the potential to be the opposite of cleansing - a way of spreading disease.

Eric Aniva is by all accounts the pre-eminent "hyena" in this village. It's a traditional title given to a man hired by communities in several remote parts of southern Malawi to provide what's called sexual "cleansing". If a man dies, for example, his wife is required by tradition to sleep with Aniva before she can bury him. If a woman has an abortion, again sexual cleansing is required.

And most shockingly, here in Nsanje, teenage girls, after their first menstruation, are made to have sex over a three-day period, to mark their passage from childhood to womanhood. If the girls refuse, it's believed, disease or some fatal misfortune could befall their families or the village as a whole.

"Most of those I have slept with are girls, school-going girls," Aniva tells me.

"Some girls are just 12 or 13 years old, but I prefer them older. All these girls find pleasure in having me as their hyena. They actually are proud and tell other people that this man is a real man, he knows how to please a woman."

Despite his boasts, several girls I meet in a nearby village express aversion to the ordeal they've had to go through.

"There was nothing else I could have done. I had to do it for the sake of my parents," one girl, Maria, tells me. "If I'd refused, my family members could be attacked with diseases - even death - so I was scared." 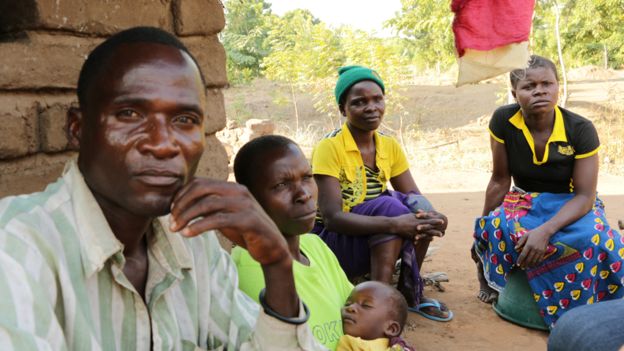 Aniva appears to be in his 40s (he's vague about his precise age) and currently has two wives who are well aware of his work. He claims to have slept with 104 women and girls - although as he said the same to a local newspaper in 2012, I sense that he long ago lost count. Aniva has five children that he knows about - he's not sure how many of the women and girls he's made pregnant.

Fagisi, Chrissie and Phelia, women in their 50s and custodians of the initiation traditions in their village. It's their job to organise the adolescent girls into camps each year, teaching them about their duties as wives and how to please a man sexually. The "sexual cleansing" with the hyena is the final stage of this process, arranged voluntarily by the girl's parents. It's necessary, Fagisi, Chrissie and Phelia explain, "to avoid infection with their parents or the rest of the community".

I put it to them that there's a much greater risk that these "cleansings" will themselves spread disease. According to custom, sex with the hyena must never be protected with the use of condoms. But they say a hyena is hand-picked for his good morals, and therefore cannot be infected with HIV/Aids.

It's clear, given the hyena's duties, that HIV is a huge risk to the community. The UN estimates that one in 10 of all Malawians carry the virus, so I ask Aniva if he is HIV-positive. He astounds me by saying that he is - and that he doesn't mention this to a girl's parents when they hire him.

All of those involved in these rituals are aware that these customs are condemned by outsiders - not just by the church, but by NGOs and the government as well, which has launched a campaign against so-called "harmful cultural practices".

Parents who have had more education than others may already choose not to hire a hyena, I am told. But the female elders I spoke to remain defiant.

"There's nothing wrong with our culture," Chrissie tells me. "If you look at today's society, you can see that girls are not responsible, so we have to train our girls in a good manner in the village, so that they don't go astray, are good wives so that the husband is satisfied, and so that nothing bad happens to their families."

Posted by Lawrencia at 6:26 pm
Email ThisBlogThis!Share to TwitterShare to FacebookShare to Pinterest
Labels: InternationalNews