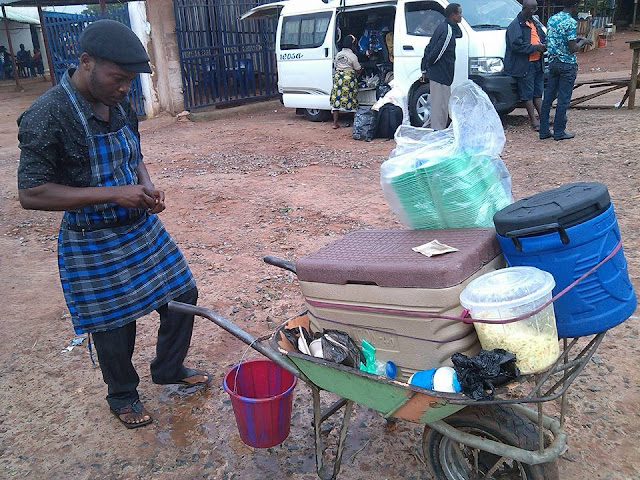 Daniel Usifoh took to his Facebook account to share his encounter with a graduate who now hawks food in a wheelbarrow after failing to secure a white-collar job. He wrote:

"I saw this man on my way to PH hawking cooked food in wheelbarrow this morning in Ekpoma, Edo State. I was moved to patronise him even when I was never hungry.

Guess what...... he is an accountant, he graduated 4yrs ago but never got any job. He decided to go catering school. Today he stepped out in the streets of Ekpoma where he graduated from to do his first personal business ever.


I asked why he decided to go this way and his response was WOW. He said "bros wetin I go do na, hence there is no job anywhere and I am the first son of my parent I decided to go this way rather than becoming an armed rubber to take care of those who took care of me from childhood before they die in regrets".

You know what..... he is an Igbo man...
I respect his courage....
How many graduates can actually do this? ‪#‎Pride‬
‪#‎UDO‬"

Posted by Lawrencia at 8:18 pm
Email ThisBlogThis!Share to TwitterShare to FacebookShare to Pinterest
Labels: Gists