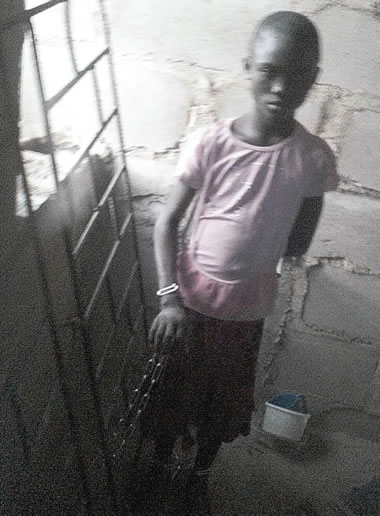 She was rescued on Thursday around 7.30 pm when neighbours living close to the building where she was chained alerted the police.

She was rescued barely a week after the police and operatives of the Nigeria Security and Civil Defence Corps rescued a nine-year-old boy, Korede Taiwo, chained by his father, Francis, for over a month for stealing.

The father and his step-mother, Kehinde, would soon appear in court.

The acting Police Public Relations Officer in the state, Abimbola Oyeyemi, said Promise was chained by her aunt, Chiamaka Okafor, who accused her of stealing N4,000.

She was said to have been chained for two days (Wednesday and Thursday) before she was rescued.

Oyeyemi said Chiamaka is currently on the run but her husband, Sunday Okafor has been arrested.

Narrating how the police found the child, the police spokesperson said, “We had an information that the girl was chained to a burglarproof window at an uncompleted building at Adigbe area and this led our men to the scene.

“The girl told us that it was her aunty who chained her on the allegation that she stole a sum of N4,000. The woman is now on the run, while her husband, who is an accomplice, has been arrested and he is helping us in our investigation.”

Chiamaka, however, escaped arrest on Friday around 4pm, when the Divisional Police Officer of Adigbe led a team of policemen and journalists to the home of the Okafors, tucked in the inner part of the area.

On sighting the police team, she allegedly fled through the backdoor, leaving behind her four children including a baby of about six months.

One of them, Godwin said,”our mummy has gone to buy baby food.”

A frantic search for her in the neighbourhood did not yield any positive result. However, three of the Okafors’ relatives and a tenant who occupied the boys quarters in the house, were arrested.

The tenant, Segun Poviesi, who’s a Beninese, said the landlady (Chiamaka) was still in the house, barely few minutes before the arrival of the police team.

He said, “She was still around about two minutes before you arrived here. I could hear splash of water from the bathroom of the main building. But I did not know how she escaped.”

But his fiancee, Omotoyosi Odu, confirmed that Chiamaka, who is the landlady, indeed chained Promise, adding that she was starved for the two days before she was rescued. She told the policemen that the victim was first chained to burglarproof iron in the Okafors’ kitchen, before she was later transferred to a room in the uncompleted part of the boys quarters.

She said, “At a point, when the girl was chained to the window in the kitchen, she was crying out to me that ‘I should please give her food.’ Other neighbours too heared her cry.

“Then the landlord had left home for their shop at Pansheke Market. Later, the girl was moved to the boys’ quarters and chained again. Some of us tried to intervene but she warned us to steer clear, because it was none of our business.”

It could not be established whether Promise is a relation of the Okafors or a housemaid.

Meanwhile, Oyeyemi, an Assistant Superintendent of Police, said the new state Commissioner of Police, has ordered the arrest of the fleeing suspect,Chiamaka, who allegedly chained the victim.

He said, “The Commissioner of Police, IIiyasu Ahmed, has ordered a manhunt for the fleeing woman in order to bring her to justice, so as to serve as deterrent to others.

“The commissioner of police is not happy with the situation barely a week after one Korede Taiwo was equally rescued from similar situation.

“The matter is under investigation and the police is after Chiamaka Okafor. As soon as we complete the investigation, they will be charged to court.”

Posted by Unknown at 9:09 am
Email ThisBlogThis!Share to TwitterShare to FacebookShare to Pinterest
Labels: Crime