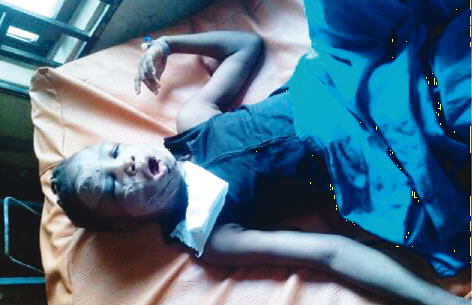 A serial rapist in Ibeshe, Ikorodu, Lagos State, is on the run after allegedly raping a 60-year-old woman, identified simply as Francisca.

After raping the sexagenarian, the armed assailant reportedly stabbed her in the cheek and brutalised her 10-year-old daughter, Marvellous, when she wanted to raise the alarm.

PUNCH Metro learnt that the rapist broke the girl’s lower jaw and blinded her right eye, leaving her and the mother for dead.

The victims were said to have been rushed by some neighbours to a hospital, from where Marvellous was later referred to the National Orthopaedic Hospital, Igbobi, Yaba.

It was gathered that the suspect, whose name had yet to be ascertained, had entered into the victims’ apartment around 2.30am on Saturday through the window.

He was said to be an accomplice of one Badoo, who was recently arrested by the Lagos State Police Command for the same crime.

A resident of the area, who identified himself only as Daniel, said the assailant forgot a handkerchief he had used to wipe off Francisca’s private parts, adding that the case was reported at the Ipakodo Police Division.

He said, “I strongly believe that these rapists are using the handkerchiefs for rituals. Badoo, who was recently arrested, told the police that he had three other members perpetrating this act. Their mode of operation is the same.

“On that Saturday, the woman and her daughter were sleeping when he sneaked into their room through the window. He raped the 60-year-old woman and injured her. He also beat up her 10-year-old daughter to a coma. The girl’s eye is seriously affected.”

An elder in the community, who spoke on condition of anonymity, said the rapists were being used by some leaders in the neighbourhood.

The resident, who said about 10 women had fled the community after the Saturday incident, urged the police to intensify efforts in arresting the attackers.

He said, “Women, especially single mothers and widows are now living in fear because of these rapists. The masterminds of these attacks are those who call themselves community leaders. I learnt Badoo had confessed same to the police, but he refused to name those people.”

Another dweller, Akin Israel, said Marvellous wanted to raise the alarm when the suspect descended on her.

“Marvellous is now in Igbobi. We were told her jaw bone had broken. I don’t know the hospital her mother was taken to, but I heard that she is recovering. Some policemen from the Ipakodo division had also visited here and they promised to go after the attacker,” he added.

PUNCH Metro had reported that Badoo, who was notorious for raping women in Ibeshe, had on June 5 barged into the flat of a Ghanaian, Grace Obina, and stabbed her to death after raped her.

The Lagos State Police Command spokesperson, SP Dolapo Badmos, said the police were on the trail of Badoo’s accomplice.

She said, “It was a case of assault occasioning harm. The victims are still receiving treatment. Efforts are on to apprehend the fleeing suspect.”

Posted by Lawrencia at 9:24 am
Email ThisBlogThis!Share to TwitterShare to FacebookShare to Pinterest
Labels: Crime