13 Children, 15 Adults Chained In House By A Prophet, Rescued By Lagos Police

A self-proclaimed prophet, Emmanuel Adeyemi, has been arrested by the police in Lagos State after 28 persons were allegedly found chained in his apartment in the Oke-Ira, Ogba area of the state.

Our correspondent learnt that there was confusion on Olamidun Close, Oke-Ira, where the suspect lived, on Friday when operatives from Area G Command, Ogba, stormed the apartment and found the victims chained in several rooms.

PUNCH Metro gathered that the victims, who comprised 15 adults and 13 teenagers, were discovered after a neighbour gave the police a tip-off that a 17-year-old boy, Toba Adeyemi, who happened to be the suspect’s son, was  chained in a room.

It was learnt that the police stormed the house at about 12pm and found Toba, they also discovered 27 others in a similar condition. 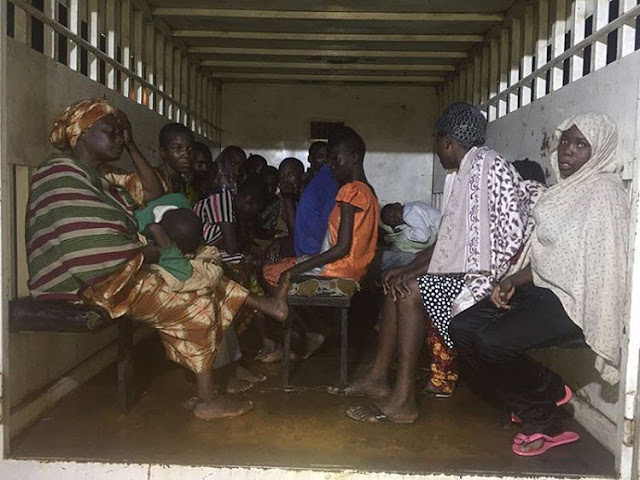 A police source in Area G, Ogba, told PUNCH Metro that the suspect claimed that his son, Toba, and the 27 others were deranged and he chained them to cure their illness.

He said, “The report we initially received was that a boy, Toba (Adeyemi), was being chained down by his father, a self-proclaimed prophet, in the estate. But when we got there, it was more than just the boy. There were 27 others chained in various rooms in the apartment.

“The suspect claims to be a spiritualist and a prophet. He said his work is to pray for sick people to get well. He said the victims were sick and he had been praying for their healing. The suspect has some magical inscriptions on the wall of his house. The victims comprised six adult males, nine adult females, seven female children, and six male children.

“The families of the victims have not shown up to identify them.”

Our correspondent gathered that the police had handed over the victims to officials of the Lagos State Ministry of Youths, Sport and Social Development.

While some of the victims were taken to a shelter, others were said to have been rushed to hospitals, which the police did not disclose.

A resident on the close, who identified herself only as Basirat, told our correspondent that the prophet was known to run a home for mentally challenged people.

She said, “The police got a hint that the man chained his son, who has mental illness. But the place is a home the man built for mentally challenged people. Policemen were here on Friday and they arrested him and his wife. Toba is Adeyemi’s son, but a neighbour, who saw how the father chained him was not comfortable with it and reported to the police.”

She added that the police had commenced investigation into whether the victims were mentally sick or not.

She said, “A total of 28 persons were rescued from the suspect’s apartment. The man has been arrested and he is undergoing interrogation. The command will get to the root of the matter. The police are also investigating to find out whether the victims are mentally sick or not.”

Our correspondent learnt that Onjefu, who hails from Benue State, was arrested by the Maroko Police Division while allegedly dispossessing some ladies of their handbags and other valuables.

The police spokesperson, Badmos, said the suspect had been transferred to the Special Anti-Robbery Squad, Ikeja, for further investigation.

She said, “The police found two toy guns and a knife on him. The suspect said he had robbed people staying in the area with the toy guns.”

Posted by Lawrencia at 11:26 am
Email ThisBlogThis!Share to TwitterShare to FacebookShare to Pinterest
Labels: Crime