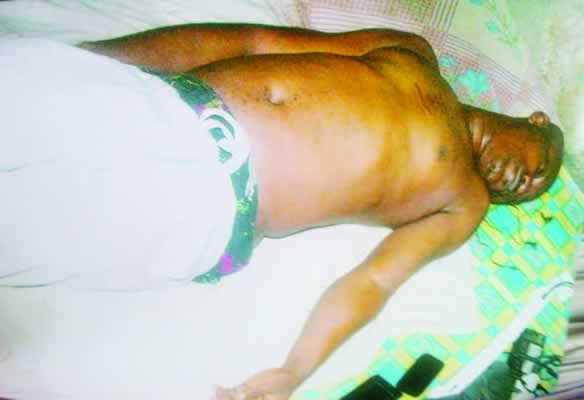 A clearing agent, Mr. Sikiru Olanrewaju, has lost his life after leaving his wife and children at home to have fun with his girlfriend in the Abule Egba area of Lagos State.

PUNCH Metro learnt that 37-year-old Olanrewaju died shortly after having rounds of sex with his lover on Surulere Street.

The lover was said to have raised the alarm which drew the attention of residents, including the landlady, who reported at the Oke-Odo Police Division.

The victim’s corpse was deposited in a morgue pending the conclusion of investigations.

A resident, who spoke on condition of anonymity, said the deceased worked with an aviation company at the Murtala Muhammed International Airport, Ikeja.

He said, “The man was married, but he had a girlfriend who lived in Abule Egba. On August 23, he had finished from work when he called her on the telephone that he would be sleeping at her place.

“The girlfriend said she told him not to come because he was married, but he insisted on passing the night at her house.

“The lady said when he got to her place, they ate the same food and drank the same water. They had sex, after which they slept.

“She said around 5am, she woke up to go to work and discovered he was stiff. She said she tried hard to wake him up, but he didn’t respond. She said she was too confused to know what to do and waited for about three hours before raising the alarm, which drew the attention of people, including the landlady.”

The resident said the landlady reported at the station, and was followed by some operatives to the apartment where the incident happened.

PUNCH Metro was told that there was no mark of violence on the victim.

A  source said Olanrewaju’s family were immediately contacted and the police broke the news to them.

She said, “The family said they don’t want the police to investigate anything. They said they had received the news in good faith and that the corpse should be released for burial in accordance with Islamic rites.  I am not sure his wife has been informed because she did not follow them to the station. But obviously, she will not receive the news well.”

She said, “The man was allegedly found dead in a room in the Abule Egba area after spending the night with his girlfriend.  A team of police detectives from the Oke-Odo Police Division visited, examined, and photographed the scene. We discovered that there was no trace of violence on the body. The corpse has been deposited in a morgue.”

Posted by Lawrencia at 7:07 am
Email ThisBlogThis!Share to TwitterShare to FacebookShare to Pinterest
Labels: NijaDrama