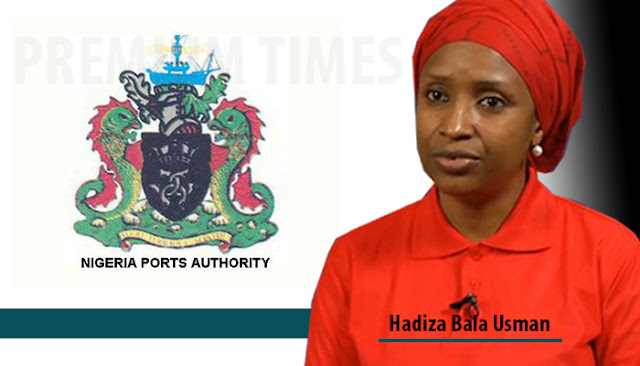 The new management of the Nigerian Ports Authority has uncovered fraud totalling N11.23 billion at the agency, officials familiar with the matter have told PREMIUM TIMES.

The officials said the Managing Director, Hadiza Bala Usman, and her executive directors have since their assumption of duties on July 18 been poring through the books of the maritime agency.

So far, this newspaper learnt, a series of transactions suspected to be fraudulent and amounting to N11.23billion have been uncovered.

Of the amount, $24.1million (N7.47billion at N310 per dollar) was traced to Heritage Bank, the successor bank to the defunct Societe Generale Bank owned by the Saraki family.

Insiders said the funds were collected by the bank as revenue for NPA, but that the financial house, in collusion with some officials of the maritime agency, failed to move it into NPA’s Treasury Single Account with the Central Bank of Nigeria.

“They were hiding the money there, and earning interests,” one official said.

The former management of the agency also failed to disclose the funds in the handover note passed to the Ms. Bala Usman-led team, our sources said.

Another six million Euros (N2.09billion at N348 to a dollar) were found concealed in two banks – First Bank of Nigeria and First City Monument Bank, our sources said.

Yet another $5.4million (N1.67billion at N310 to a dollar) belonging to the NPA was moved to TSA accounts in the CBN different from those belonging to the maritime agency, insiders say.
It remains unclear what the new NPA management is doing to recover the funds, but our sources said Ms. Bala Usman already contacted Heritage Bank, First Bank and FCMB directing them to release the agency’s funds in their custody.

Heritage Bank’s officials were quoted to have claimed that releasing the funds might lead to the collapse of their bank.

When contacted, the NPA managing director confirmed that her team had been receiving briefings and looking into the books of the agency in the past weeks.

She said some revenue leakages and hidden funds had been located but that she was not ready to provide details because the minister supervising the authority had not been briefed.

PREMIUM TIMES became aware of the fraud in the NPA hours after Ms. Bala Usman indicated that her management would audit funds sunk into dredging projects.

Ms. Bala Usman made the disclosure to journalists at the end of her tour of Calabar port, which many stakeholders suggested should be dredged to accommodate bigger ocean-going vessels.

According to her, there is need to look at some of the funds expended on capital and maintenance dredging.

She said that funds used for such dredging projects in the past “should not be that high’’.

“It’s good time for us to compare capital dredging and maintenance dredging,’’ the News Agency of NIgeria quoted the managing director as saying.

Posted by Lawrencia at 6:28 pm
Email ThisBlogThis!Share to TwitterShare to FacebookShare to Pinterest
Labels: NationalNews