Are Indians Above The Law In Nigeria? - Man Asks, Demanding Justice For His Sister Who Was Allegedly Brutalised By Her Indian Boss

Chukwuka Ignatius Shared these photos and the sad story on his Facebook page. He wrote:

"I write you about the case of my immediate junior sister . She works as personsl assistance to an Indian man's wife. This Indians live @Flat B4-18,19 benevista tower, Banana Island. He owns Ethylene Industrial company @ isolo industrial estate, close to the popular Aswani market, his name is Mr. Jay Keswani, he is one of the Aswani brothers.

My sister Miss Faith Nwaneri, works with the wife as a PA. She works friday to Wednesday nd have her off days on Thursdays. At banana island, they usually go in there with a gate pass, which he's supposed to get for my sister, but he didn't, rather he gave the receipt of his own monthly dues which covers only him and his family.

For 8months, My sister has been pleading her way into the island, until that fateful Friday morning of 12th of august 2016, as she was coming back from her off day, the security personnel refused her entry, demanding she shld provide her gate pass. At that point she was delayed @ the gate. 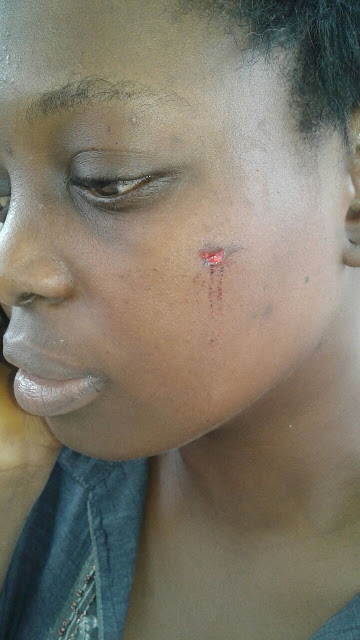 When she finally came, the wife of d Indian man asked her why she is late, and she told her it was the gate pass issue that caused her delay. The woman got angry and went in to quarrel with the husband. Then the Indian man call my sister and demand that she shld return the form she was to fill and submit for the gate pass. As usual my sister said if he collects it, he hnormally tear it and sack the person, so my sister @ that point think of saving her job, so she told him that she already submitted it, and that she is just waiting for him to give her the money for the processing.

But wen he insist that he would follow my sister to the gate to collect the form @ all cost, my sister seening the anger in him quickly tell him that as a matter of fact that she is still with the form, and was only waiting for him to give her the money so she could submit both the form and the money for the processing of the gate pass. There he got furious nd said" you lied to me?".

Then he hit her with his briefcase bag, nd my sister fainted. So at first, he thought it was a joke, then he hit her with his leg to comfirm if she was just pretending, But when he pulled her over and notice pool of blood, he quickly call his wife and they start pouring water on her head to rivive her. So at last they revived her and left her at their apartment at 19th floor, and they left for office.

After my sister regained consciousness, she struggled through the back staircase to d basement, where a good Samaritan, helped her to Falomo police station, from there she was referred to Falomo police hospital, for treatment. There, my sister called me to come over and I paid the bill's, then I took her home.

When I contacted Mr. Jay Keswani, to find out what would make an elderly man like him hit a lady young enough to be his daughter and got her injured, he (Mr. Keswani ) claimed its an accident. 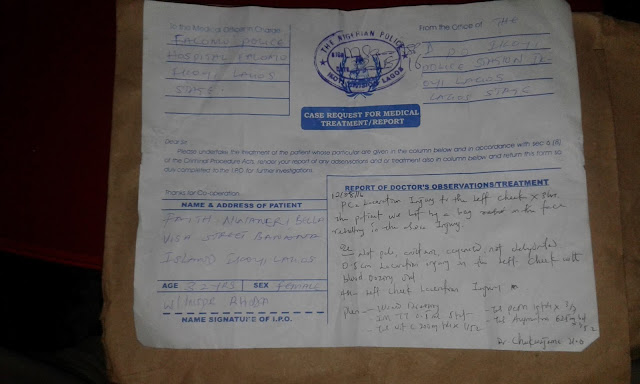 The falomo police tried to invite him, but where refused entering even to serve him with the invitation letter. The security men at tower claimed they were acting on instructions not to collect the invitation letter from the police man who came to deliver the letter. The security men there at benefista tower also told us that they will do every to silent the case, as they claim its their responsibility to protect their clients as assigned.

Ever since then, Mr. Jay Keswani ("who most told my sister that Nigerians has no future without the Indians who came into the country to invest, and that he whatever he does to any Nigerian, he will never apologize") has been walking freely with no action taken against him.

All efforts to reach him to resolve this matter by our lawyer proved abortive, as he has bluntly refused to comply. Any my lawyer is working on getting his arrested. And if he is ready negotiate out of court, no problem, then he should pay the damages nd compensation as earlier demanded by my lawyer or put up a better negotiation.

My question is what will prompt Mr. Keswani to have such heart to hit a woman like that and claim it was an accident? If she had died in his apartment, perhaps Mr. Keswani would have cover up this case, and have my sister thrown into the lagoon. Our lawyer wrote him to reach a compromise for settlement and payment of compensation within seven days which ended yesterday, but up till now there's no response from him. It's shows that this man has no regards for rule of law and the Nigerian citizen.

All i needed is for friends to make publicity through their facebook pages, so dat justice will not be swept under the carpet.

Attached below are evidence and the picture of the Indian man."

Posted by Lawrencia at 9:12 pm
Email ThisBlogThis!Share to TwitterShare to FacebookShare to Pinterest
Labels: NationalNews