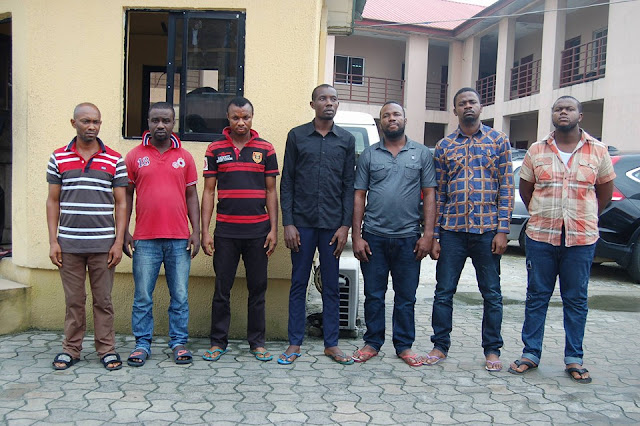 Operatives of the Economic and Financial Crimes Commission, EFCC, have arrested a suspected impersonator posing as the former Executive Chairman of the Commission, Mr. Ibrahim Lamorde.

The suspect, Promise Tochi Nwalozie was arrested in Port Harcourt, Rivers State, in a sting operation that yielded the arrest of six other internet fraudsters. One of the fraudsters, Onukagba Uche Prosper, is a youth corps member serving in the Tai Local Government Area of Rivers State.

Nwalozie was using the identity of Lamorde to send scam mails to foreigners, mostly Europeans and Americans and in the process extorted sizeable amount of foreign currencies from them. His weapon of fraudulent interaction with his victims was a fake electronic copy of the identity card of the former EFCC's boss.

Besides, he was also posing as Barrister Peter Jackson, a spurious lawyer working with the National Judicial Council, NJC in Nigeria. As a lawyer, he was defrauding his victims by assuring them that he would help in the recovery of money lost to different Nigerian cyber fraudsters. To do this, Jackson was collecting various sums of money as service charges from his victims. Some of his victims are: Betty. G. E, an American and Georgina M, an Australian.

In addition to all these, Nwalozie had multifarious electronic scam documents in various folders in his e-mail box, ostensibly for the payment of a spurious N12,500,000.00( Twelve Million, Five Hundred Thousand Naira only) to one Robert Giese, an American, by the "Office of the Presidency, Federal Republic of Nigeria, Abuja". To further deceive Giese, he swore to a fictitious " Affidavit Of Claim of Federal High Court of Nigeria" deposed to by a fake Justice Ibrahim Auta, OFR, on behalf of Giese. The "Affidavit" was signed by a former Attorney General and Minister of Justice, Mohammed Bello Adoke. To achieve his fraudulent schemes, he had several e-mail addresses such as:sirpeterjackson@gmail.com,promisenwalozie@gmail.com, bigenoughforcare@gmail.com among others.

Aside Prosper, (youth corps member), five other internet scammers were arrested in the sting operation and they are: Onuoha Akachukwu Danhessy; Ohaji Ujunwa Raymond, a.k.a Francis Ray Emar; Henry Onyebuchi Ogbonna; Eboh Emeka Emmanuel and Nwaorgu Chidi Precious. Prosper was involved in online dating scam, also known as romance scam. Through the scam, he defrauded unsuspecting foreign widows, mostly from Europe and America. His scam identity was Mark Fest, a United States soldier serving in Bulgaria. To perfect his fraudulent schemes, he secured a " business relationship" with one of the arrested fraudsters, Onuoha Akachukwu Danhessy, his cousin.

Danhessy was serving as an intermediary between him and one H. Macaulay, a Nigerian undergraduate at the Medical University, Varna, Bulgaria who was assisting him to collect and send proceeds of their criminality to Nigeria, through Western Union and Money Gram money . All the three victims of Prosper are Philippinos: Ivy P. S, ( $2,000); Mel R.( 800 Pound Sterling) and Lolita T. Danhessy has other ingenious schemes to his credit. In his romance scam, he had reportedly raked in a total sum of $50,000( Fifty Thousand United States Dollar) from Maria J. Al, an American that he promised to marry.

Ohaji Ujunwa Raymond a.k.a Francis Ray Emar is another suspected impersonator who was sending scam e-mails to his victims in Europe and America in the name of Abubakar Malami (SAN), Attorney General and Minister of Justice and Mrs. Kemi Adeosun, Minister of Finance. One of his victims, Georgina M, an Australian, lost $1,500( One Thousand, Five Hundred Dollars) to him. Other suspected scammers are Henry Onyebuchi Ogbonna, a member of a syndicate serving as a cashier to his group members, Eboh Emeka Emmanuel, another romance scammer that duped a Dubai- based Philippino: E. F. Aquino of N500,000( Five Hundred Thousand Naira only) and Nwaorgu Chidi Precious, another accessory to romance scam and cashier to Nwalozie.

All the suspects are in EFCC custody and would be charged to court soon.‪#‎Impersonation‬. ‪#‎EFCC‬

Posted by Lawrencia at 10:29 pm
Email ThisBlogThis!Share to TwitterShare to FacebookShare to Pinterest
Labels: Crime