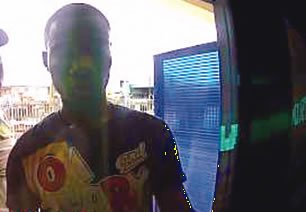 Some suspected fraudsters have stolen over N700,000 using the Automated Teller Machine card of a furniture maker, Adegoke Fashola.

Punch learnt that the suspects tricked Fashola’s apprentice, Segun Abiodun, whom he had asked to make withdrawal at the Ikotun Road branch of Access Bank Plc.

The 15-year-old Abiodun was around the bank premises when he was approached by three men who claimed to be prophets.

They were said to have asked him to go and get N10 salt and taken the ATM card from him after he divulged the PIN code. The suspects withdrew over N700,000 from the victim’s account through the ATM and online transactions.

Abiodun told PUNCH Metro that the men said they had a vision for him when he was around the bank premises.

He said, “I was in the bank when three men called me and asked who sent me to withdraw money from the bank.  After I told them it was my boss, one of them said they were prophets and they had seen a vision.

“He said I needed prayers and gave me N10 to go to buy salt on the street. They collected the ATM card and the PIN code. But by the time I returned, they were gone. They didn’t tell me their names, but if I see them, I can recognise them.”

His boss, Fashola, told PUNCH Metro that although he reported the matter at the Ikotun Police Station and a suspect was arrested, the police were playing pranks on the case, adding that the suspect was released.

He said, “I had money for a customer’s job in the account. And it was not the first time that I would ask Segun (Abiodun) to withdraw money for me.

“On Saturday, July 9, around 2pm, I sent him to withdraw some money for me. When he returned and said some men had collected the card,  I quickly rushed to the bank. I met some security men and we told them that the fraudsters sat at the gate.

“I went in and spoke with two top officials of the bank, who checked my account details and said I had N720,000. A lady at the counter said my account had been blocked and the fraudsters could do nothing again.”

Fashola said the bank official, however, promised to call the bank’s headquarters so that online transactions would not be carried out on the account.

It was learnt that there was a bit of delay in reaching the bank’s headquarters and when the call eventually went through, the furniture maker was told he had only N4,000 in his account.

He said a man was observed around the banking premises monitoring what was happening, adding that the suspect was nabbed.

“I picked the guy immediately and took him to the police station which was opposite the bank. I narrated everything to the Investigating Police Officer and told him we saw the suspect spying on us during the confusion in the bank.

“The policeman said he knew the suspect and he was notorious for such act. He spoke with my dad and asked for some money. My father asked me to give him N2,000. He said we should wait to see the Divisional Police Officer.

“However, when the DPO arrived, the policeman took me and the suspect to the counter. He later took us outside and when the suspect’s relatives arrived, he dismissed me. I learnt he later released the man,” he added.

Our correspondent learnt that the statement of accounts, which was released by the bank, showed that the fraudsters withdrew N80,000 from the ATM on the bank premises.

Four internet purchases, totalling N623,000 were later made on the account.

Our correspondent was told that one of those who made the withdrawal from the ATM, whose photograph was captured by the CCTV, was later apprehended by a motorcyclist, and the suspect was handed over to the police.

It was learnt that suspect was released on bail by the police after he promised to go and get the money.

Fashola said the second suspect was at large, saying the police had been compromised and efforts to recover his money had been abortive.

The spokesperson for Access Bank , Mr. Abdul Imoyo, said he was in Brazil, adding that he was not aware of the incident.

He promised to get back after being fully briefed.

The Police Public Relations Officer, SP Dolapo Badmos, said, “The complainant sent his apprentice to Access Bank, Ikotun. Along the road, two conmen accosted the boy and obtained the ATM card together with the PIN. They made an online withdrawal of N827, 000.Two suspects were arrested by the IPO based on suspicion. Investigation through CCTV picture from the bank did not resemble any of the suspects. The division has called on the complainant for further  interview, which he is yet to honour. Meanwhile, the CP has directed the division to transfer the case to the Special Anti-robbery Squad for discreet investigation.”