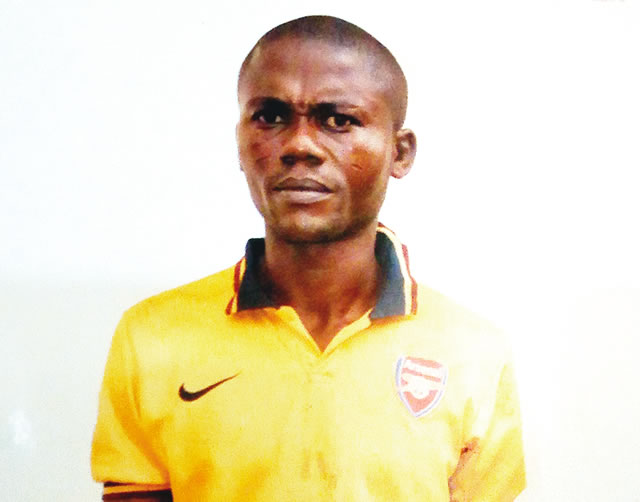 A security guard, Uchenna Okoh, has been arrested for alleged theft of goods worth N2.1m at a shop on Ikotun-Idimu Road, Lagos State.

The suspect had reportedly visited the shop – Finest Couture Boutique – on June 20 on the pretext that he wanted to buy jeans, shirts and shoes.

While negotiating the prices of the items with the salesgirl, Juliet Aghedo, he was said to have lured her into a corner in the shop and squeezed her neck until she passed out.

Okoh, who worked as a security guard in the Mushin area, reportedly carted away a bag, 56 pairs of jeans, 36 pieces of women leggings, 15 shirts, 13 wristwatches and four mobile phones valued at about N2.1m, before Aghedo regained consciousness.

PUNCH Metro learnt that the shop owner, Francisca Osomiha, a lawyer, reported the matter to the Lagos State Commissioner of Police, Fatai Owoseni, through a petition.

The petition read in part, “On June 16, a man walked into Finest Couture Boutique which is under my care. The man (Okoh) pretended he wanted to buy jeans but the price he was asking for did not go down well with us. So he left, leaving his phone number with the salesgirl.

“This same man, on June 18, called her on the phone that he was around the shop to buy the goods. But when we got to the shop, till the end of the day, he didn’t show up. On June 20, just as she (Aghedo) was opening for the day business, the man came to the shop, pretending he had come to buy the goods.

“He lured her into the inner shop where he knew nobody would hear her screams. He held her neck to the point that she started foaming in the mouth and fainted. He packed away those things, including N280,000 cash not knowing that our Closed Circuit Television was on and had picked all that happened.”

Our correspondent gathered that the police eventually apprehended the Delta State indigene after tracking him down with his picture generated from the CCTV.

“The phone number he used to call the salesgirl was also used to trail him. He had confessed to the crime,” a police source added.

Okoh, in his statement to the police, said he sold the stolen items to one Francis at Computer Village, Ikeja, adding that he took to stealing sometime in 2010 while in Benin, Edo State.

He said, “I am a security guard at Mushin. I have been robbing at plazas in Ikotun for some time now. I sold the jeans I stole on that day to Francis at Computer Village for N1,000 a pair. He bought four pairs of canvas for N2,500 each. I was introduced to stealing when I was in Benin.”

A police prosecutor, Sergeant Donjor Perezi, brought the suspect before an Ikeja Magistrate’s Court on Monday on three counts bordering on robbery.

Perezi told the court that the offence was punishable under sections 228, 295 and 297 of the Criminal Law of Lagos State, 2011.

The presiding magistrate, Mrs. O. Olanipekun, did not take the plea of the defendant and ordered that he should be remanded in prison.

Adjourning the case till November 17, 2016, Olanipekun instructed the prosecutor to send a duplicate of the case file to the Directorate of Public Prosecutions for legal advice.

Posted by Lawrencia at 9:13 am
Email ThisBlogThis!Share to TwitterShare to FacebookShare to Pinterest
Labels: Crime