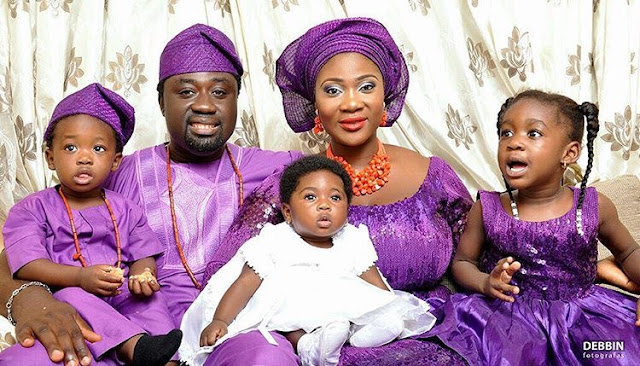 No doubt Mercy Johnson is one of the popular screen divas in Nigeria as she has featured in countless movies and winning awards in the process. Once upon a time, she was seen as a controversial actress but that perception changed as soon as she got married and settled in her home.

Now, accolades and admiration follow the young lady around save for the time some people criticised her for not spacing the birth of her children. But the criticism didn’t get to her as she has told her fans and foes that they should “expect baby number 4” soon.

Talking about her not doing child-spacing, the serial award-winning actress said she had charted a course for her life even before she became famous and she is following her plans.

“I feel that when you haven’t gone through life and you don’t have a bearing in life, that’s when you see certain decisions as unreasonable. Most of these people who make these statements have not even realised what they want to do with their lives yet.

“I had planned my life right from when I was growing up. I arranged my life the way I wanted it to go. And that is why even when I was at the peak of my career and marriage came, I grabbed it because I know age keeps going and time waits for no one.

“It means that I can have all of my four kids and then still get back to shape and come back to what I love to do. So I am not going to say things like, ‘I don’t want to have kids yet’ or ‘I am not going to get married and I want to keep acting because the young shall always grow’, you are not going to be number one forever. That is why when it is time for you to do something, you do it. Yoruba will always say in their prayers that when the time for a child to talk has come, by the grace of God, she will talk. When it’s time to go to school, he will go to school. That’s what I’m trying to do. I want to define my life in a way my daughter will want to define her own life,” she said.

She further explained how she has been able to joggle her career, motherhood and marriage.

“I think what has got me this far is placing my decisions on a scale of preference. I love what I do, I adore my husband, I adore my kids, so every time I have to make a decision, I pick which is more important, and I start from there. I understand the home front is more important so I manage my home and create time to do what I have to do. I think that has helped me get this far,” she said.

Already, the actress is back to work after her vacation in the US and she is one of the cast of the movie, From Freetown, which is written, produced and directed by UK based director, FD Wuriee.

‘From Freetown’ is a story filled with passion and dreams towards achieving set goals as well as changing human perception towards life situation.

Posted by Lawrencia at 9:36 am
Email ThisBlogThis!Share to TwitterShare to FacebookShare to Pinterest
Labels: Gists